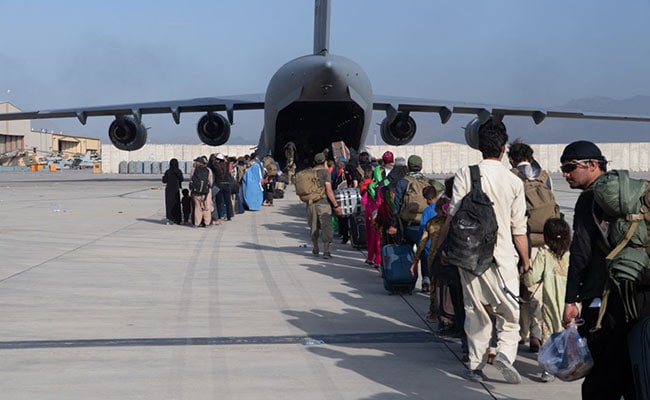 “The Taliban have made commitments to us,” US says. (File)

The Taliban has assured 100 countries that it will continue to allow foreigners and Afghans with foreign travel papers to leave the country “in a safe and orderly manner,” even after the US troop withdrawal ends Tuesday, the countries said in a statement Sunday.

“We have received assurances from the Taliban that all foreign nationals and any Afghan citizen with travel authorization from our countries will be allowed to proceed in a safe and orderly manner to points of departure and travel outside the country,” the statement said.

“We are all committed to ensuring that our citizens, nationals and residents, employees, Afghans who have worked with us and those who are at risk can continue to travel freely to destinations outside Afghanistan,” added the statement, which was also signed by the European Union and NATO.

The group said it would continue issuing travel documents to “designated Afghans,” adding that “we have the clear expectation of and commitment from the Taliban that they can travel to our respective countries.”

China and Russia were not among the signatories to the document.

Jake Sullivan, the national security advisor to US President Joe Biden, said earlier Sunday that any Americans who elect to remain “are not going to be stuck in Afghanistan.”

The US has “a mechanism to get them out” if they choose to leave in the future, Sullivan added on the Fox News network, without elaborating.

“The Taliban have made commitments to us,” he said.

France and Britain plan to call on the United Nations on Monday to create a “safe zone” in Kabul to allow humanitarian operations to continue, French President Emmanuel Macron told the Journal du Dimanche, saying the proposal was “completely feasible.”

The permanent members of the UN Security Council — the US, Britain, China, France and Russia — are to meet Monday to discuss the Afghanistan crisis.

France ended its evacuation efforts in Afghanistan on Friday and Britain followed suit on Saturday.

US troops have been scrambling in dangerous and chaotic conditions to complete a massive evacuation operation from the Kabul airport by an August 31 deadline.