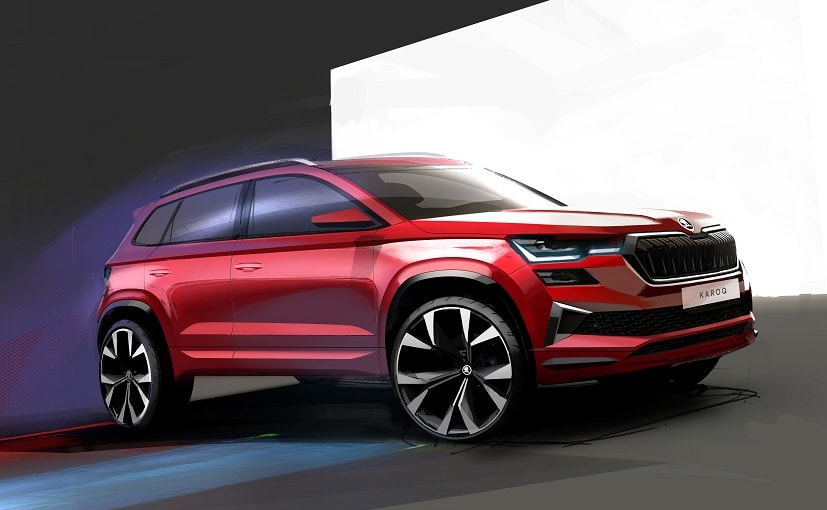 Skoda has released new design sketches of the upcoming Karoq compact SUV. Slated to be unveiled on November 30, the Karoq is receiving a update after 4 years.

The 2022 Skoda Karoq facelift will come with sharper styling, along with new and updated features

Skoda Auto is all set to unveil the 2022 Karoq facelift this month, on November 30, and ahead of its official debut, the carmaker has released design sketches of the compact SUV. Now, the Karoq SUV was on sale in India until earlier this year, and it came to India as a completely built unit (CBU). However, with the initial lot sold out, Skoda shifted its focus towards the new Skoda Kushaq. However, the Karoq continues to be a strong product for Skoda in the global markets and given the fact that the SUV has been in the market since 2017, this is the right time for a mid-life update.

Skoda says that the updated Karoq has undergone a design and technology update. Judging by the sketches, the SUV certainly looks sharper now and will come with new sleeker headlamps, and an aggressive front bumper. Skoda says that the grille too has become wider now features twin vertical slats, new hexagonal design with chrome borders. The SUV also gets wider air intake along with a second lighting unit, while the lower variants will get fog lights, the top variant will get separate LED modules. Updates include a longer rear spoiler, refreshed rear apron with a black diffuser, and new much sharper-looking LED taillamps

The second sketch, which gives us a glimpse of the rear and three-quarters of the SUV, reveals a redesigned rear section. Updates include a longer rear spoiler, refreshed rear apron with a black diffuser, and new much sharper-looking LED taillamps. Also, the crystalline structures add a special visual effect to the taillights, which will retain their signature C-shaped graphic. The SUV also retains the centrally mounted Skoda lettering, like all new Skoda cars.

Under the hood, globally, the Skoda Karoq comes with a range of petrol and diesel engine options, including the 1.5-litre TSI motor that was on sale in India. Mechanically, the SUV is expected to remain unchanged, and will also continue to offer the optional 4×4 system.