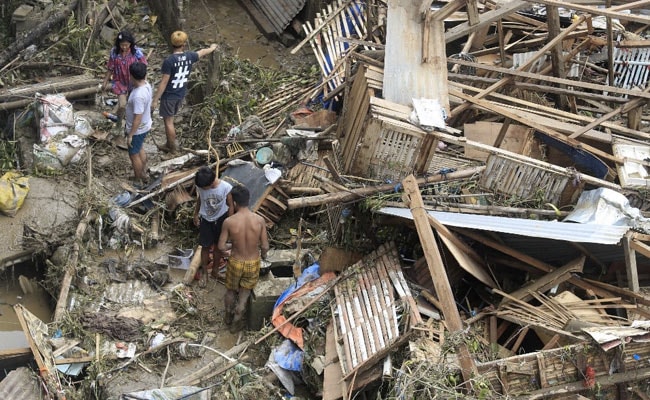 Rai was a super typhoon when it smashed into Philippines’ Siargao.

At least 21 people have been killed in the strongest typhoon to hit the Philippines this year, officials said Saturday, with “alarming” reports of destruction on islands that bore the brunt of the storm.

More than 300,000 people fled their homes and beachfront resorts as Typhoon Rai ravaged the southern and central regions of the archipelago, knocking out communications and electricity in many areas, ripping off roofs and toppling concrete power poles.

Rai was a super typhoon when it smashed into the popular tourist island of Siargao on Thursday, packing maximum sustained winds of 195 kilometres per hour (120 miles per hour).

Its wind speeds eased to 150 kph as it barrelled across the country, dumping torrential rain that flooded villages, uprooting trees and shattering wooden structures.

“This is indeed one of the most powerful storms that has hit the Philippines in the month of December in the last decade,” Alberto Bocanegra, head of the International Federation of Red Cross and Red Crescent Societies in the Philippines, told AFP.

“There has been severe damage” on Siargao island and the northern tip of the southern island of Mindanao, Timbal said, referring to areas that took the full force of the typhoon as it slammed into the country.

There are around 100,000 residents on Siargao, but the population swells with visiting surfers and holidaymakers.

The vice governor of Dinagat, an island near Siargao, said at least six people had been killed there.

“Odette was so strong,” Nilo Demerey told ABS-CBN, using the local name for the typhoon.

Residents on the island of around 128,000 people were “trying to repair their houses because even our evacuation centres were torn down,” he said.

“They can’t seek refuge anywhere else… everything was destroyed,” he added.

“Siargao, Surigao and Dinagat island all suffered the same fate — we are appealing for help.”

Bocanegra warned the disruption to electricity would affect the water supply, raising concerns about hygiene and disease.

After lashing Palawan island, Rai emerged over the South China Sea on Saturday and was headed towards Vietnam, the state weather forecaster said.

Rai hit the Philippines late in the typhoon season — most cyclones typically develop between July and October.

Scientists have long warned that typhoons are becoming more powerful and strengthening more rapidly as the world becomes warmer because of human-driven climate change.

The Philippines — ranked as one of the world’s most vulnerable countries to the impacts of climate change — is hit by an average of 20 storms and typhoons every year, which typically wipe out harvests, homes and infrastructure in already impoverished areas.