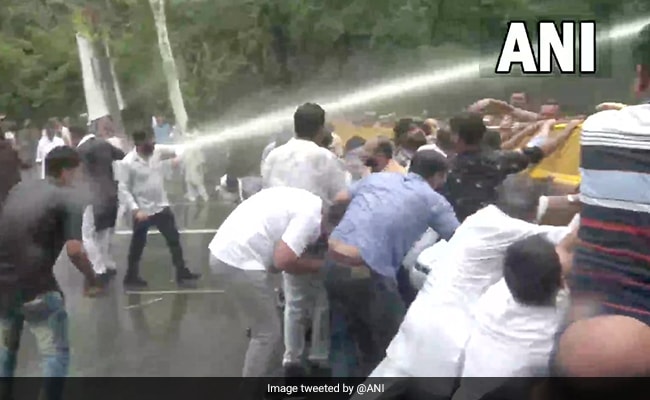 Sonia Gandhi is being quizzed by the ED officials in the national capital.

As many as 75 Congress MPs including Leader of Opposition in Rajya Sabha Mallikarjun Kharge and several workers were detained by the Delhi Police on Thursday for holding demonstrations against the questioning of the party’s interim president Sonia Gandhi by Enforcement Directorate (ED) in the National Herald case.

When Congress MPs left from Parliament to Congress headquarters, around 75 MPs were taken by Delhi Police in buses.

Congress workers in Nagpur were also detained in the wake of the protest.

Meanwhile, Sonia Gandhi is being quizzed by the ED officials in the national capital.

“All Congress MPs and CWC Members have courted mass arrest outside our Party HQs in a show of collective solidarity with Congress President Sonia Gandhi, a target of Vishguru’s political vendetta. We are being taken away to a police station in Old Delhi evidently,” said party leader Jairam Ramesh.

Protesting Congress leader Mallikarjun Kharge said that the ruling party (BJP) is showing its highhandedness by misusing the probe agencies by asking them to target opposition leaders.

“They (ruling party) want to show how powerful they are. We’ve raised the issue of inflation in Parliament but they’re not ready for discussion. We are now raising the issue of misuse of central probe agencies,” Mr Kharge.

“We are protesting peacefully. They cannot suppress our voice,” said Mr Hooda.

Rajasthan Chief Minister Ashok Gehlot, who is also in Delhi slammed the probe and said that since Sonia Gandhi is over 70 years old, ED should have gone to her house for investigation.

“The kind of personality and aura she (Sonia Gandhi) has and since she is more than 70 years old, ED should have gone to her house for investigation. I want to meet the chief of ED and CBI and tell them what people are thinking about central agencies,” said Mr Gehlot.

After Mr Gehlot was detained he said, “It is happening for the first time in the country that they are stopping dharna demonstration.”

“There is misuse of agencies in the country… it’s our right to protest in a democracy, but it is also being crushed upon…,” said Sachin Pilot.

The ED had on June 1 summoned Sonia Gandhi to appear before its investigators on June 8 in the case for the first time in connection with a money laundering case involving the National Herald.

The ED wants to record both Sonia Gandhi’s statements under criminal sections of the Prevention of Money Laundering Act (PMLA).

Last month the ED had questioned Rahul Gandhi on several occasions in the case.