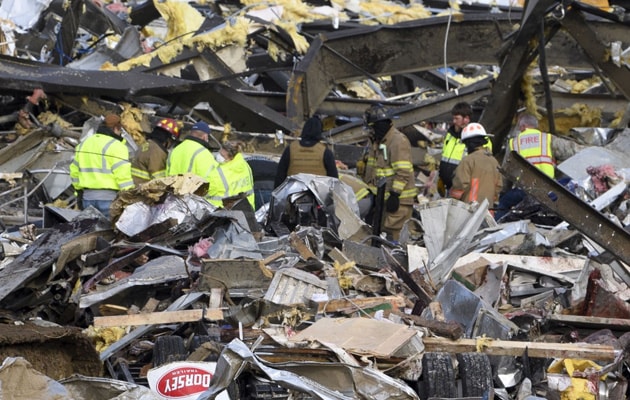 The Kentucky governor choked back tears as he reflected on the tragedy that has killed dozens.

At least 64 people died in Kentucky from devastating tornadoes that left a trail of destruction across the US state, the governor said Monday, with 14 people confirmed killed in other states.

Two days after the tornadoes hit, officials are still struggling to establish the toll as emergency responders pick through the rubble of thousands of damaged or destroyed homes and buildings.

“Undoubtedly there will be more (dead). We believe that it will certainly be above 70, maybe even 80,” said Kentucky Governor Andy Beshear.

Thousands of people have been left homeless by what Beshear has described as the state’s worst storm on record.

Some 105 people in Kentucky remain unaccounted for, and “it may be weeks before we have final counts on both deaths and levels of destruction,” he said.

The governor choked back tears as he reflected on the tragedy that flattened parts of the American heartland.

But he also said there was a “light of hope” surrounding a collapsed candle factory in the ravaged town of Mayfield, where some 110 employees were working late Friday to meet the holiday rush when the tornado ripped the building to shreds.

The factory owners reported eight dead and eight missing from the collapse, and that “94 are alive and have been accounted for,” Beshear said.

“We feared much, much worse. And again I pray it is accurate,” he added.

Mountains of debris dotted several cities and towns, and many livestock were dead, Beshear said.

Communities were also digging out in five other states where tornadoes touched down Friday night into Saturday, in what US President Joe Biden described as “one of the largest” storm outbreaks in American history.

The tornadoes killed at least 14 people outside of Kentucky, including six in an Amazon warehouse in the southern Illinois city of Edwardsville, where they were on the night shift processing orders ahead of Christmas.

Biden declared a major disaster in Kentucky, allowing additional federal aid to be channeled into recovery efforts, and the administration sought to assure stricken communities that help is coming.

“We will be there throughout to enable the people to recover and rebuild,” US Homeland Security Secretary Alejandro Mayorkas told CNN.

With an immense recovery effort looming, immediate concerns for residents’ safety and well-being were front and center as cold weather began to bite in towns that resembled war zones.

A nondenominational church in Mayfield was handing out food and clothing to storm survivors while also providing space for the county coroner to do his work, said pastor Stephen Boyken of His House Ministries.

People “come with pictures, birthmarks — they talk now about using DNA samples to identify those who have been lost,” he told AFP.

The storm system’s power placed it in historic company.

Storm trackers said it had lofted debris 30,000 feet (9,100 meters) into the air, and the Mayfield twister appeared to have broken an almost century-old record, tracking on the ground more than 200 miles (320 kilometers).

Mayfield, a town of about 10,000 near the westernmost tip of Kentucky, was perhaps the hardest-hit community: city blocks were leveled, historic homes and buildings were beaten down to their slabs, tree trunks had been stripped of their branches and cars lay overturned in fields.

Randy Guennel, a 79-year-old retiree, survived two days with his sick wife in their destroyed home before finding shelter at a church north of Mayfield.

“We’ve worked so many years for all this and it’s up in smoke,” he said, choking back sobs. “We don’t have a house, no cars, no nothing.”