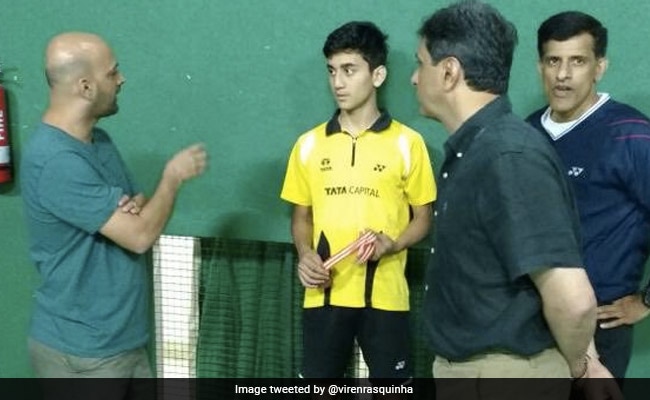 Years before he reached the final of prestigious All England Open Badminton Championships, Lakshya Sen’s meteoric rise was predicted by a badminton legend. Prakash Padukone, who is among the only two Indians who have ever won All England — which is the world’s oldest and most prestigious badminton tournament — had foretold Lakshya Sen’s success in the game more than 10 years ago, according to former India hockey captain Viren Rasquinha.

In a Twitter post shared Saturday, Viren Rasquinha recalled how Prakash Padukone had once told him that Lakshya would “conquer the world”. This happened around 10 years ago, when a young Lakshya Sen had recently been moved to the Prakash Padukone Badminton Academy in Bengaluru for training.

“A decade back when we started supporting a tiny @lakshya_sen and shifted him to PPBA Bangalore, Prakash Padukone sir told me that one day this boy will conquer the world,” wrote Mr Rasquinha, who is the CEO of non-profit organisation Olympic Gold Quest, which was co-founded by Mr Padukone. Olympic Gold Quest works to identify, train and assist potential Olympic medal talent from India.

At that time, Mr Rasquinha had laughed off the comment. Today, he has a different take on the matter. “I laughed. But he obviously wasn’t joking,” Viren Rasquinha wrote while sharing two throwback photos of Lakshya Sen.

A decade back when we started supporting a tiny ⁦@lakshya_sen⁩, & shifted him to PPBA Bangalore, Prakash Padukone sir told me that one day this boy will conquer the world. I laughed. But he obviously wasn’t joking. ⁦@OGQ_India⁩ ⁦@ppbaindia⁩ ⁦@Sports_PDCSE⁩ pic.twitter.com/R8cZyrLv35

On Sunday, world number one Viktor Axelsen defeated India’s Lakshya Sen to win the All England Open Badminton Championships. The young Indian shutter was bidding to become only the third man after Prakash Padukone (1980) and Pullela Gopichand (2001) to win the All England, but his hopes were dashed in the men’s singles final that lasted 53 minutes.

Despite the loss, Lakshya Sen, 20, has cemented his reputation as a rising badminton star. He reached the final after securing his maiden world championships bronze in December, his first Super 500 title at India Open in January and finishing runner-up at the German Open last week.