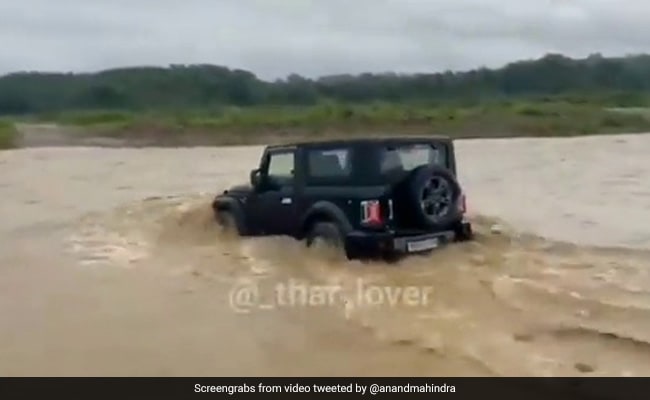 Anand Mahindra shared a video of a Mahindra Thar in water.

Anand Mahindra may soon have to create a new vertical called “Mahindra Amphibious Vehicles” – or so he feels after looking at the recent spate of videos highlighting Mahindra cars and their extraordinary water-navigation capabilities. After posting footage of a Bolero SUV moving through floodwater in Gujarat, the chairman of Mahindra Group took to Twitter on Wednesday to share a video of a Mahindra Thar crossing a river.

The new Mahindra Thar has created a name for itself among off-roading enthusiasts, and videos of the vehicle navigating challenging terrains have emerged on the Internet time and again. In the clip shared by Anand Mahindra, the Mahindra Thar is seen entering a river and making its way to the opposite shore.

“After I RT’d the tweet about a Bolero in Gujarat wading through flood waters, several of you shared this video that’s circulating on YouTube,” wrote Anand Mahindra while sharing the video. “I think we may well have to create a new vertical called ‘Mahindra Amphibious Vehicles’ (MAV’s!)” he added.

After I RT’d the tweet about a Bolero in Gujarat wading through flood waters, several of you shared this video that’s circulating on @YouTube I think we may well have to create a new vertical called ‘Mahindra Amphibious Vehicles’ (MAV’s!????) pic.twitter.com/UPRLMfVZCk

The video has been watched more than 2 lakh times on the microblogging platform. In the comments section, some Twitter users shared similar videos of other Mahindra vehicles.

At 1:00 am I read your tweet… within secs I started browsing videos on YouTube and came across unbelievable shocking videos… ???????? https://t.co/MfXSaWepnM

Others, however, warned about the dangers of driving in water.

I watched many unimaginable videos
However, I sincerely think as a responsible CEO you should have not shared such videos as this looks extremely dangerous and it may encourage others to try such stunts…
???????? #Mahindrapic.twitter.com/uAwCcFINUJ

And if water enters into engine then be ready to get dead Mahindra towed on flatbed……. pic.twitter.com/oLiYObVUzU

Before this, Mr Mahindra had also shared a video of a Mahindra Bolero cruising on a flooded street after heavy rainfall in Gujarat.

Seriously? During the recent rains? Even I am pretty amazed. https://t.co/Co5nve9uwd

Footage of the Mahindra Thar crossing a river had gone massively viral on social media last month. The video was watched over 9.4 million times on Facebook.