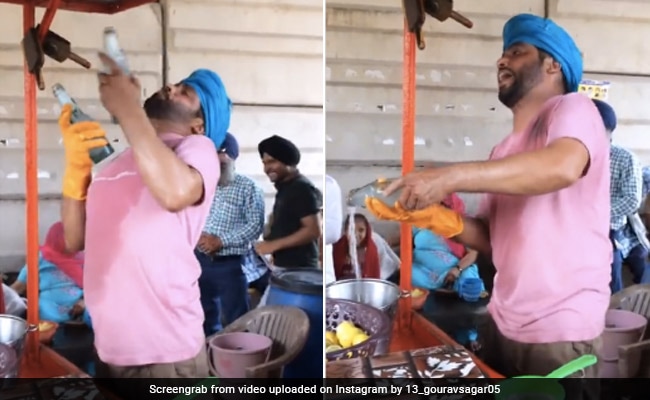 The lemon soda seller is using a unique style to sell the drink.

When “Kacha Badam” song surfaced on social media, it became an instant hit. And it made Bhuban Badyakar, a humble peanut seller in West Bengal, a celebrity. Then, a catchy jingle used by a guava seller to sell the fruits went wildly viral on the internet.

Now, the style and jingle of a lemon soda seller are delighting the internet. The jingle he uses – “Baaki nimbu baad vich paunga (I’ll use rest of the lemons later)” – is making waves on social media.

The people gathered around the man are seen enjoying his unique way to sell the lemonade.

The lemonade seller describes the ingredients too while telling about the benefits of having the drink in summers.

The video has been shared by different users on various social media platforms. On Instagram, it has been posted by 13_gouravsagar05. It has been viewed 9.21 lakh times and the number is rapidly increasing.

“This is the son of ‘Kacha Badam‘ singer,” added another.

Some users had shared the video of the same man a few months ago. It has been gaining traction again due to several such jingles emerging in recent weeks after Badyakar’s song.

The “Kacha Badam” song became a viral hit after one of his customers shot a video of him while selling peanuts and shared it on social media.

After the song went viral worldwide, people started asking whether the singer was getting paid for the views of his song. Mr Badyakar then reportedly received Rs 3 lakh as remuneration from the music label that first remixed his original song.