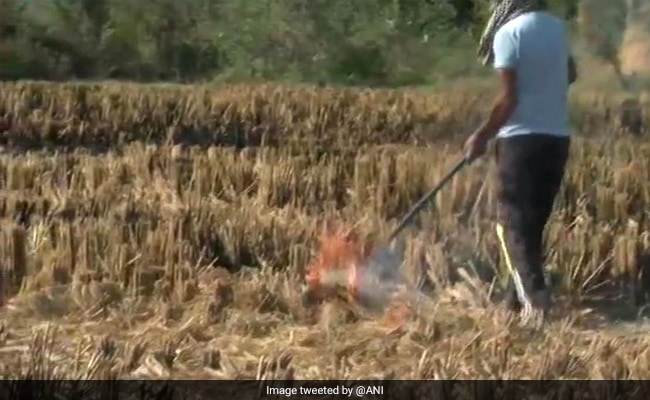 The air quality panel has also asked these states to submit a compliance report by August 30. (File)

Ahead of the harvesting season, the Commission for Air Quality Management (CAQM) has asked Delhi and neighbouring states to ensure the adoption and application of a standard protocol developed by ISRO for estimation of crop residue burning fire events using satellite data.

The commission, mandated to devise and execute plans to prevent and control air pollution in the national capital region and adjoining areas, has also asked Delhi, Punjab, Haryana, Uttar Pradesh, Rajasthan to develop a time-bound comprehensive action plan, in consultation with stakeholder agencies responsible for monitoring and reporting of agriculture residue burning events, based on the protocol.

The commission had stressed the need to develop and implement a standardised methodology across NCR and adjoining areas for the monitoring of fire events at meetings with the Indian Space Research Organisation (ISRO) at a meeting held in December last year.

The protocol has been prepared in consultation with stakeholder agencies like State Remote Sensing Centers and Indian Agricultural Research Institute, it said.

“Now, therefore, in view of the compelling need to monitor and control air pollution from stubble burning, the commission…hereby directs government of NCT of Delhi to ensure adoption and application of the standard protocol for estimation of crop residue burning fire events using satellite data,” the directions read.

The commission said the protocol should be adopted uniformly across the states of Punjab, Haryana, Uttar Pradesh, Rajasthan, and Delhi, and not restricted to Punjab and Haryana alone.

The panel on air quality has also asked these states to submit a compliance report on the adoption of the protocol by August 30.

The northern states of Punjab, Haryana, Rajasthan and Uttar Pradesh attract attention during the paddy harvesting season between October 15 and November 15.

Farmers set their fields on fire to quickly clear off the crop residue left behind after harvesting and before cultivating wheat and potato. It is one of the main reasons for the alarming spike in pollution in Delhi-NCR.

Despite a ban on stubble burning in Punjab and Haryana, farmers continue to defy it as there is a short window between the harvesting of paddy and sowing of wheat.

The high cost of manual or mechanical management of straw is a major reason why farmers choose to burn it.

But these measures are yet to make any significant impact on the ground.

According to a recent study by the Council on Energy, Environment and Water (CEEW), a Delhi-based not-for-profit policy research institution, a relatively longer stubble-burning period and unfavourable meteorological conditions were primarily responsible for Delhi’s worsening air quality in winters last year.

The analysis showed the contribution of stubble burning to Delhi’s PM2.5 levels exceeded 30 per cent for seven days (between October 10 and November 25) in 2020 as against three days in 2019.