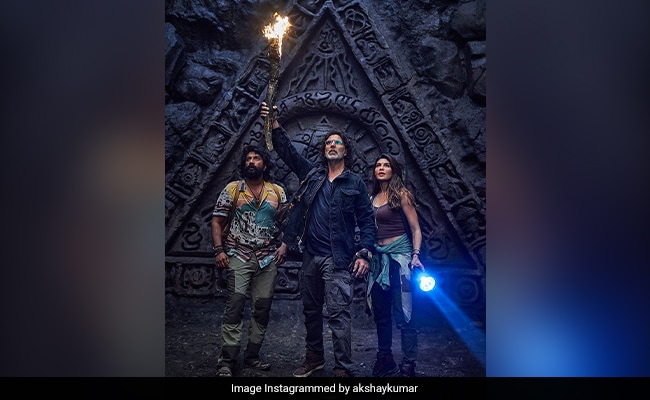 Ram Setu will release on Diwali this year.

Akshay Kumar’s latest film Ram Setu is all set to release in theatres on Diwali, this year. The actor has announced the news with a poster, which features him alongside co-stars Satya Dev and Jacqueline Fernandez. Here, Akshay Kumar is holding a flambeau. All three are looking up, awestruck, even as an imposing crypt stands tall behind them. While Ram Setu’s poster went viral in no time, it has also triggered a meme fest on social media platforms.

But first, take a look at the poster:

A glimpse into the world of #RamSetu.

A section of users was baffled by why Akshay Kumar was depending on a flambeau when  Jacqueline Fernandez clearly has a powerful torch in hand [which she had, in a rather futile exercise, directed towards the ground].

Why is the guy holding a flame when the girl is holding a fully working torch? https://t.co/YfOpTcFaau

Pointing at the director, another user said, “Director does a real bad job with mashaal and a torchlight being used in parallel.”

Director does a real bad job with #Mashaal and a #Torchlight being used in parallel . ???????? https://t.co/wRNnGxVcYx

“When your house has no electricity but your neighbours’ place is lit up,” read one of the comments.

When your house has no electricity but your neighbours’ place is lit up… https://t.co/28q1dcDezA

Was the torch only for show, some wondered.

If battery operated torch with high lumens capacity, but ???? torch to use. #KuchBhihttps://t.co/Ph0n7NrEgs

A person felt that the film was giving “National Treasure vibes but sasta (cheaper) version.” With National Treasure, he was referring to the Hollywood film featuring Nicolas Cage.

Why is this giving National treasure vibes but sasta version ???????????????? https://t.co/fkJbyO3LqHpic.twitter.com/wMd2sguKZq

Echoing a similar sentiment, a user said, “Definitely looks like a National Treasure rip off.”

Definitely looks like a National Treasure rip off!!! #PrimeVideoPresentsIndiahttps://t.co/cUQB63Tnp2

Some have described the poster as “hilarious”.

The film will stream on Amazon Prime Video after theatrical release.