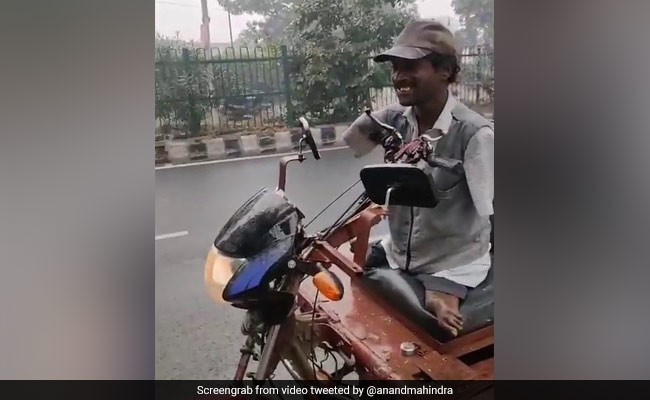 Industrialist Anand Mahindra was left awestruck by a Delhi man who did not let his “disability” become a drawback. Despite being a quadruple amputee, the man was seen driving a modified vehicle in a video that has gone massively viral online. In the video, the man – who has no arms or legs – was seen answering questions from a passerby. “Scooty ka engine hai (it has the engine of a scooty),” he says of his modified vehicle. At the request of the person filming the video, also demonstrated how he managed to maneuver the vehicle around despite having no limbs.

“I have a wife, two small children and an ageing father… that’s why I go out to earn,” the unnamed amputee said. He revealed that he has been driving his vehicle for five years. On being showered with compliments from the people filming him, he simply smiled and thanked God.

Sharing the video on Twitter, Mr Mahindra said he did not know where it was filmed — although a longer version of the clip makes it clear that it was filmed in Delhi, a fact also confirmed by looking at the license plates of other vehicles in the video.

The Chairman of Mahindra Group applauded the man and wrote: “Received this on my timeline today. Don’t know how old it is or where it’s from, but I’m awestruck by this gentleman who’s not just faced his disabilities but is GRATEFUL for what he has.”

He further tagged his colleague Ram and Mahindra Logistics as he asked: “Ram, can @Mahindralog_MLL make him a Business Associate for last mile delivery?”

Received this on my timeline today. Don’t know how old it is or where it’s from, but I’m awestruck by this gentleman who’s not just faced his disabilities but is GRATEFUL for what he has. Ram, can @Mahindralog_MLL make him a Business Associate for last mile delivery? pic.twitter.com/w3d63wEtvk

The video has racked up over 50,000 views on Twitter since being shared this afternoon by Mr Mahindra. Other versions of the video have been doing the rounds of the Internet for a couple of weeks now.

In the comments section, one Twitter user said he had seen the man around South Delhi’s Mehrauli area.

Sir, I have seen him around South Delhi area Mehrauli. Don’t know about his whereabouts, but have to acknowledge his courage.

Others showered praise on the man.

Important point to understand here is that he is still happy for what is he now and he is facing his current condition with smile. We people always get disappointed with small failures in life. a lot to learn from him. Sir, looking forward you making him your business associate

Amazing his spirits… thanks Anandji for the instant recognition ????????

Anand Mahindra, who has 8.5 million Twitter followers, often gives shout-outs to local talent. Earlier this month, he was left impressed by a Maharashtra man’s modified four-wheeler and offered to gift him a Mahindra Bolero SUV.