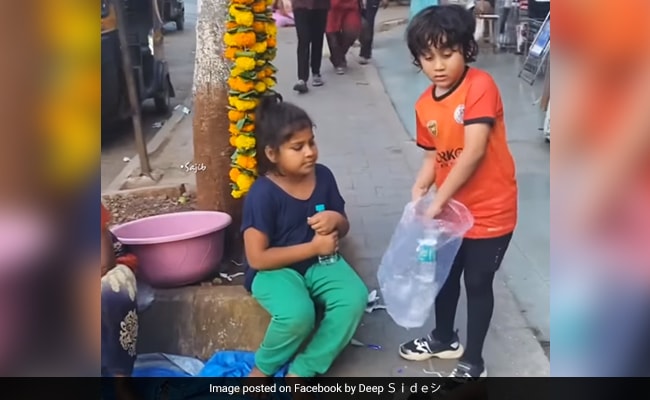 Internet is full of videos, which show acts of kindness from people. One such video going viral currently shows a boy distributing water bottles among flower sellers sitting on the roadside.

The video has been shared on Twitter by IAS officer Awanish Sharan. The location of the video is not known, but it has touched the hearts of many social media users.

“Your Small Kindness Can Make Someone’s Day Special,” the IAS officer says in his tweet, sharing the video originally posted on Facebook by Deep Side, a content creator.

The boy is seen carrying a pack of packaged mineral water. Subsequent shots show his handing over the bottles to the flower sellers amid scorching heat. One of the roadside vendors, an old woman, even gives blessings to the boy.

The boy is also seen interacting with the children of the flower sellers who are sitting nearby.

The video has received more than 2.20 lakh views and over 14,000 likes, with users admiring the gesture shown by the little boy.

“It’s highly impressive Young kid reveals the fact of real need/help in this summer Keep it up baby,” a Twitter user said while commenting on the IAS officer’s post.

Another one called the boy an “angel on duty of humanity”.

“What a beautiful soul!!! God bless you and your beautiful parents. You made my day dear!” a third user commented.

Such videos often make waves on social media. A few years ago, a man gave up his first-class seat on a plane for a woman and her 11-month-old daughter.

Kelsey and her daughter were travelling from Orlando to Philadelphia for Lucy’s treatment for chronic lung disease.