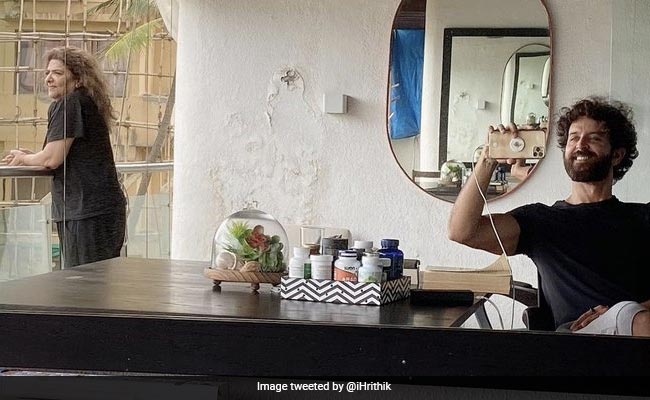 In a photo shared by Hrithik Roshan, fans notice the seepage in the wall behind him.

Celebrities – they are just like us, at least when it comes to common household problems. In the day and age of carefully-orchestrated Instagram pictures, there are some stars who have given us a refreshingly-candid (and relatable) glimpse into what goes down behind the scenes. The latest to do is Anushka Sharma – who congratulated soon-to-be-neighbours Vicky Kaushal and Katrina Kaif on their wedding with a hilarious Instagram Story yesterday. In her story, Anushka referred to the “construction sounds” that she and her family have been subjected to, thanks to the work going on in Katrina and Vicky’s apartment.

Vicky and Katrina will move into a sea-facing apartment in Mumbai’s Juhu neighbourhood after their wedding, according to a report in News18. Virat and Anushka also own two floors in the same building.

“Glad you are finally married so that now you can move into your house soon and we can stop hearing construction sounds,” wrote Anushka Sharma Speaking of construction, scaffolding is a familiar sight in Mumbai – whether you are a superstar or a common man. When actor Hrithik Roshan shared a picture on his social media accounts back in September, fans were surprised to see not one, but two common problems that most Mumbaikars face – views of the city marred by construction work and seepage in walls.

Twitter users were quick to notice the crumbling paint on the wall visible behind the actor as he shared a selfie with his mother. The fact that his apartment overlooked a building under construction also did not escape them.

Sunday feels on Wednesday are best ☺️
Now go give your mom a hug. pic.twitter.com/f1st25rE3I

“All Mumbaites saw the seepage…And felt good about their own houses. Mumbai is a great leveller,” one Twitter user wrote.  “I suddenly feel so much better about the construction happening next doors. It’s not just my view, we all are in this together,” another remarked.

Household troubles also plague Saif Ali Khan, who rents out several properties in Mumbai. The actor opened up about the hassles of being a landlord on an episode of The Kapil Sharma Show.

“Arre, it’s a very big headache. Main bhi chhota sa landlord hoon (Even I’m a small-scale landlord),” Saif Ali Khan said on the show. “We still have the old mentality, so, we invested in flats and put them up on rent. But I get calls about issues about the ACs, leakage,” he added. The 51-year-old actor said he has appointed someone to look after the tenants and their problems now.