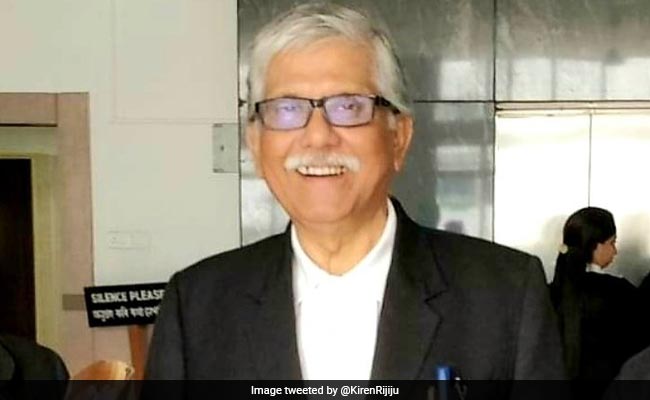 Arunachal Pradesh Advocate General Nilay Dutta died of a massive heart attack in Karnataka’s Coorg on Sunday. He was 68, and is survived by his wife, son and daughter.

“The renowned advocate had gone to Coorg on Wednesday to celebrate his 46th marriage anniversary. He suffered a massive heart attack around 2.30 AM on Sunday in the resort where his family was staying and he died before reaching the hospital,” a close friend of Dutta said.

His family said that he will be cremated in Bengaluru during the day as his body cannot be brought back to Assam, from where he hailed, for the next three days due to COVID-19 protocols in Karnataka.

On Friday and Saturday, Dutta had himself uploaded on Twitter several pictures of his anniversary celebrations with his family and close friends. He was among the most prominent and distinguished legal brains of Assam and the Northeast, and had argued several cases in the Supreme Court.

Dutta had studied in the St. Stephen’s College in Delhi and was later involved in the Naxalite movement, for which he was arrested and imprisoned. After his release, he became a bank employee and then an advocate. He held the post of the Advocate General of Arunachal Pradesh since 2016.

An avid sports lover, Dutta was the president of the Assam Cricket Association and did umpiring in several international cricket matches. He was also a member of the High-Level Committee (HLC) of the Union Home Ministry on the Clause-6 of the Assam Accord that submitted its report in February last year.

His untimely death triggered reactions from across the political spectrum.

“In his passing away, we have lost a legendary legal luminary of the North East. My sincere condolences to his family and prayers for his soul to attain highest abode,” Arunachal Pradesh Chief Minister Pema Khandu tweeted.

Deeply anguished by the sad news of passing away of Advocate General of Arunachal Shri Nilay Dutta Ji.

In his passing away, we have lost a legendary legal luminary of the North East.

My sincere condolences to his family and prayers for his soul to attain highest abode. pic.twitter.com/Yl2HxnxyvT

Mr Khandu’s Assam counterpart Himanta Biswa Sarma said that his state has lost one of the brightest lawyers, who had also contributed to many other fields including sports administration.

“His demise has created a huge void difficult to be filled up. Offer my deepest condolences to his family and well-wishers,” Mr Sarma tweeted.

Union Minister of Shipping, Ports and Waterways Sarbananda Sonowal said in a Twitter post, “A scholar with brilliant legal acumen, his death is a huge loss to the fraternity. My deepest condolences to his family and friends.”

I’m deeply saddened by the tragic demise of Advocate General of Arunachal Pradesh Shri Nilay Dutta Ji. A renowned legal luminary of North-East who had been a guide to many young lawyers & professionals.

My heartfelt condolences to his family. May his soul rest in peace 🙏 pic.twitter.com/YkSzkTMNcc

“A renowned legal luminary of North-East who had been a guide to many young lawyers & professionals. My heartfelt condolences to his family,” Mr Rijiju said.

Congress leader Rahul Gandhi also offered his condolences to the family of the senior advocate. “He was a great lawyer and a passionate cricket administrator. He will be fondly remembered,” Mr Gandhi said on Facebook.

The party’s Lok Sabha MP Gaurav Gogoi said he will miss Dutta for his wit, legal acumen, interest in politics and commitment to Assam.

“While his death has left an irreplaceable void, he will live forever through his many contributions to the society,” the son of former Assam chief minister Tarun Gogoi said.

Assam Congress chief Bhupen Kumar Borah expressed shock and sorrow over Dutta’s death. “…one of the renowned cricket umpires, a social worker and thinker. I pray to God for eternal peace of Dutta’s departed soul and my heartfelt condolences to his family in this time of grief,” he said.

Trinamool Congress leader Sushmita Dev offered her condolences and said Dutta was “one of the sharpest legal minds, much revered by all”.