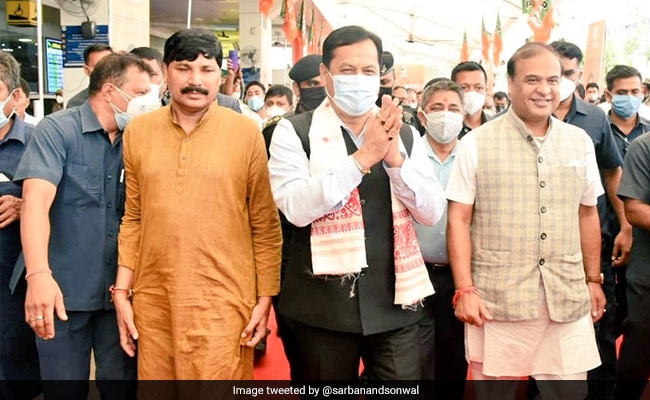 Police complaints have been lodged in Assam against Chief Minister Himanta Biswa Sarma, Union Minister Sarbananda Sonowal and several BJP lawmakers, accusing them of violating Covid guidelines laid down by the state government.

The complaints allege that Covid protocols were violated during the Jan Ashirwad Yatra organised by the state BJP unit.

Union Minister Sonowal, who preceded Mr Sarma as Chief Minister, is visiting Assam for the Yatra after he was appointed Union Minister For Ports, Shipping and Waterways; and AYUSH in the recent cabinet expansion. The three-day Yatra began on Saturday.

The regional party lodged police complaints at multiple police stations, including at Dispur and Latasil.

The regional party has said more than 200 people had gathered at the Guwahati airport to welcome Mr Sonowal and at the memorial of legendary musician late Bhupen Hazarika.

“It is to bring to your notice that in this occasion, we noticed that more than 200 people gathered including Ministers, Members of Parliament, and Administrative officers including the Deputy Commissioner of Kamrup (M) District namely Sree Biswajit Pegu in Bharat Ratna Lokpriya Gopinath Bordoloi International Airport as well as in Bharat Ratna Dr Bhupen Hazarika Samadhi Kshetra, Jalukbari, which clearly shows the violation of SOP issued by the Government of Assam,” a complaint stated.

The complaints cite clauses from the SOP issued by the state disaster management authority and allege that they were violated during the BJP events.

“…we request you to register a case against the persons mentioned above and investigate the matter; and appropriate punishment is inflicted as per the penal provision of law,” the complaint stated.

The BJP is yet to respond to the police complaints against the senior leaders.

The Jan Ashirwad Yatra is being organised so that Union Minister can seek the blessings of the people, according to the BJP. It will cover a distance of 19,567 km across 13 states, including 212 Lok Sabha constituencies and 265 districts. All ministers would spend a total of 142 travel days.