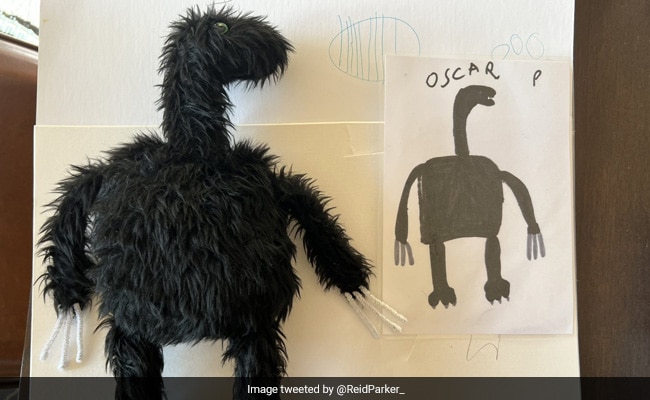 Mr Parker also created a GoFundMe page for the teacher.

An Australian teacher is gaining global fame after creating hand-made stuffed toys for each of her students based on the “monster” drawings they made. Her efforts came to light after a student’s father took to Twitter and shared how his son’s teacher made a lot of toys for five to six-year-olds attending school in Melbourne.

The father, Reid Parker, tweeted the picture of the monster toy made by his kid’s teacher. The image featured his child’s monster drawing and the stuffed toy the teacher made. “My kid’s teacher made toys for her class based on their drawings. Pay teachers more” Mr Parker wrote in the caption of the post.

My kid’s teacher made toys for her class based on their drawings.
Pay teachers more pic.twitter.com/3vBuQ4Zaw6

In a following tweet, Mr Parker also jokingly stated, “I’ve been told it’s a therizinosaur. So we know at least ONE person likes Jurassic World Dominion.” He even shared a series of pictures that showed different kinds of toys made by the teacher for the entire class which immediately sent the internet into a frenzy.

“This is amazing. What a talented a dedicated educator!” wrote one user. “Yay for this wonderful teacher! What dedication. Lucky children,” said another.

A third user commented, “That is some serious love for her students,” while a fourth added, “they are amazing! great pics from the kids, but what a wonderful and skilled person to make them all!”

Meanwhile, in one of his tweets, Mr Parker also stated that he has created a GoFundMe page for the teacher, who wishes to remain anonymous, so people can send her money. He said that she undertakes the project each year. “Apparently during the lockdown, she rode around the neighbourhood and dropped off the toys at each child’s house,” he said.

“No Sex Assault”: Autopsy Of Delhi Woman Dragged By Car