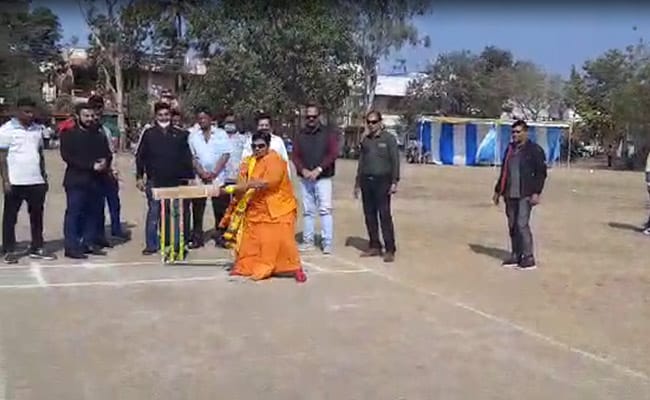 The video shows BJP’s Pragya Thakur in Bhopal hitting the ball with a bat.

Bharatiya Janata Party MP Pragya Singh Thakur is out on bail in the Malegaon blasts case on health grounds but has often been seen participating in activities even though she usually moves in a wheelchair. In a latest video, she was seen playing cricket in Bhopal, Madhya Pradesh.

The nearly one-minute video shows the saffron-robed leader in Bhopal’s Shakti Nagar area hitting the ball with a bat with remarkable ease as several people cheer on.

Out on bail in the Malegaon blasts case on medical grounds, BJP MP Pragya Singh Thakur was seen playing cricket in Shakti nagar Bhopal.She came under fire after a video of her playing kabaddi and basketball surfaced few days back @ndtv@ndtvindia@manishndtv@GargiRawatpic.twitter.com/KZWsSrWmjs

The leader, who has begged off some court appearances in the Malegaon blasts case citing ill health, has repeatedly come under fire from the Opposition in the past for dancing and playing basketball.

Critics say the BJP MP has displayed no infirmity in recent videos that went viral. She was seen breaking into a Garba dance while visiting Navratri celebrations in October and a few days later, a video was widely shared on social media showing her playing basketball in Bhopal. She was also seen enjoying a round of kabaddi in October with women players at a ground in Bhopal, her constituency, while visiting a Kali temple.

Pragya Thakur is an accused in the 2008 Malegaon bombings that killed 10 people and left many others injured.

The National Investigation Agency (NIA), in 2017, granted her bail on health grounds. In the 2019 Lok Sabha Elections, she won from Bhopal, defeating her nearest rival, Congress leader Digvijaya Singh, by over 3.6 lakh votes.

She appeared before the Mumbai’s Special National Investigation Agency trial court in November and was asked to appear before the court whenever it summons her in the matter.