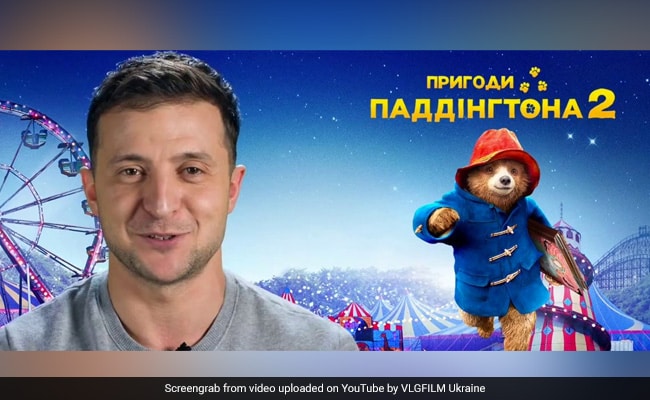 Volodymyr Zelensky was an actor before he became the president of Ukraine.

Before he became the president of Ukraine in 2019, Volodymyr Zelensky was an actor and comedian who starred in several TV shows and films. While he is well known for having won Ukraine’s version of Dancing With The Stars in 2006 and his starring role in the Ukrainian television series Servant of the People, a little-known aspect of Mr Zelensky’s career has now emerged online. New details reveal that Mr Zelensky gave voice to Paddington Bear in the Ukrainian-dubbed version of the children’s film, according to NBC News.

A spokesperson for StudioCanal, which produced Paddington, confirmed that Mr Zelensky voiced the beloved animated character in Paddington (2014) and Paddington 2 (2017).

British actor Hugh Bonneville, who plays the bear’s foster father in the Paddington films franchise, was among those surprised by this piece of trivia.

“Until today I had no idea who provided the voice of @paddingtonbear in Ukraine,” Hugh Bonneville wrote on Twitter, sharing the Ukrainian-dubbed promotional video of Paddington 2 featuring Mr Zelensky – who was then an actor and comedian.

Until today I had no idea who provided the voice of @paddingtonbear in Ukraine. Speaking for myself, thank you, President Zelenskiy. #PaddingtonBearhttps://t.co/5VaMi201Fs

The promotional video shows Mr Zelensky – who is currently leading the Ukrainian army in its defense against Russia – introducing himself. “Hello to my darling friends. I, Volodymyr Zelensky, will lend my voice to the wonderful, charismatic, friendly bear Paddington,” he says, according to a translation provided by Variety.

Before he became president, Mr Zelensky was better known in Ukraine for his starring role in Servant of the People. The show follows a teacher who inadvertently becomes president. Mr Zelensky’s own run for office was inspired by this role.