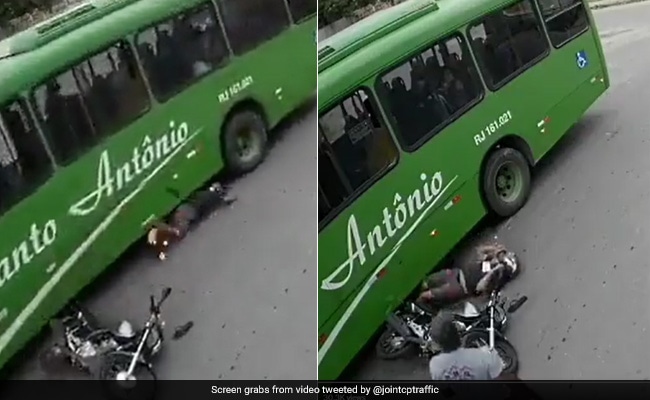 Bengaluru Traffic Police shared a message on the importance of helmets.

Bengaluru’s Joint Commissioner of traffic police Dr BR Ravikanthe Gowda recently shared a chilling video and urged bikers to use only “good quality ISI mark helmet”. The horrifying clip shows a man on a bike dodging death even after coming under a wheel of a bus.

The video opens to show the man, identified as 19-year-old Alex Silva Peres, riding a two-wheeler at a turning and then falling right under a bus coming from the opposite direction. The wheel is seen hitting Mr Alex’s head – which is covered with a helmet – and throwing him a few feet forward.

As the bus comes to a stop, Mr Alex’s helmet is seen stuck under the wheel. The bus then reverses to release the helmet, while people gather to help the 19-year-old, who manages to walk away.

As the clip gained traction online, the Bengaluru Traffic Police (BTP) also shared a message on the importance of helmets. “Wearing helmet is equally important for the pillion rider,” the post read on Twitter.

According to local media outlet Istoe, the incident took place on Monday in Belford Roxo, Rio de Janeiro. Mr Alex was largely unharmed from the accident. He was going to a bakery to buy bread for his family when on a curve he came across a bus arriving. He was startled and tried to stop the bike, however, he slipped and ended up falling under the bus.

Meanwhile, the video of the horrifying crash has taken the internet by storm. Mr Gowda’s post has accumulated more than 30,000 views and several likes and comments. “Omg very scary, but yes good helmet can save ur life,” wrote one user. “The video is scary and not from India. But the point is well understood,” added another.