On her website, Sian Proctor says she was selected the pilot of the space mission in 2021. (File)

Sian Proctor, the pilot of the world’s first all-civilian space mission, just had the “best ride” of her life as she touched down following a three-day trip to Earth’s orbit on board a SpaceX capsule.

The SpaceX capsule on Sunday successfully concluded the historic orbital mission with no professional astronauts on board. Proctor, 51, was the mission pilot alongside mission commander Jared Isaacman, a billionaire who financed the trip for the crew.

“Best ride of my life! Thank you @SpaceX and @elonmusk! @inspiration4x,” she tweeted after her touchdown, tagging SpaceX founder Elon Musk.

Best ride of my life! Thank you @SpaceX and @elonmusk! @inspiration4xhttps://t.co/kQFa9mo8GK

“Nothing but #gratitude!! Thank you to everyone who helped make our mission a success and supported us through this historic journey,” she said retweeting an Inspiration4 video showing the four crewmembers inside the capsule.

Nothing but #gratitude!! Thank you to everyone who helped make our mission a success and supported us through this historic journey. ????????????‍????????????????@inspiration4x@SpaceX#Space2inspirehttps://t.co/W0PgPn6fpu

In another tweet carrying a photo of her leaving the capsule, she said, “We did it!!”

On her website, Proctor says she was selected the pilot of the space mission in 2021.

“Before becoming an astronaut, I was an analog astronaut. Analog astronauts engage in a wide range of research such as human physiology, psychology, crew cohesion, exercise, and nutritional studies along with testing cutting-edge science, technology, & engineering applications,” she says.

The Inspiration4 mission of sending first all-civilian crew to orbit also included Isaacman who had funded the trip aiming to make space a bit more accessible. The two other crew members were Hayley Arceneaux, a 29-year-old nurse, and Chris Sembroski, 42, a US Air Force veteran. 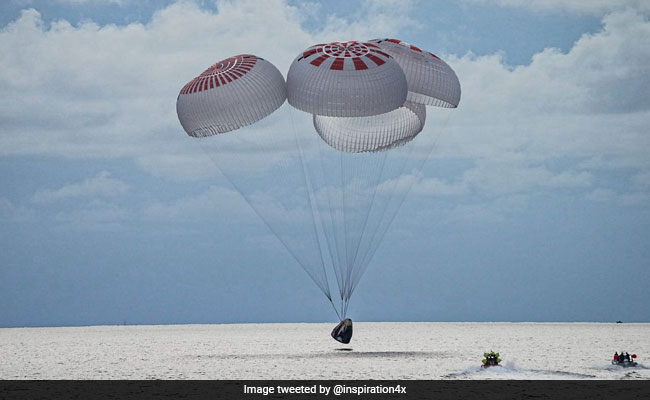 The SpaceX capsule splashed into the Atlantic Ocean at 2306 GMT, according to a video feed by the company, after it was slowed down by four large parachutes, reported news agency AFP. The capsule remained in the orbit for three days, circling the globe over 15 times each day, after its launch at 0002 GMT on Thursday.

“That was a heck of a ride for us, and we’re just getting started,” said Isaacman shortly after landing.