Bitcoin and ether show highest rally since May 2021

Bitcoin and Ether reached their highest levels in more than two months after a major Ethereum upgrade and even in the face of uncertainty over crypto rules in the U.S. infrastructure plan.

Bitcoin gained as much as 3.1% to $45,328 on Sunday, its highest level since May 18. Ether increased as much as 3.5% to $3,191, gaining for a fifth day amid the Ethereum network’s London upgrade, which reduces the pace of growth in the coins.

“A mood of optimism appears to have returned to cryptocurrency markets,” Paolo Ardoino, chief technology officer at Bitfinex, said in comments Friday. “Bitcoin is leading the charge while Ethereum continues to make gains” after its network upgrade. Still, he said, “the turbulence that we’ve seen in crypto markets over recent weeks is unlikely to subside.”

Cryptocurrencies are showing signs of life again after pulling back significantly from record highs in recent months, a setback blamed on concerns about China’s crackdown and Elon Musk-fueled questions about Bitcoin’s energy usage.

Bitcoin, however, is approaching its 50-day moving average, a mark it hasn’t touched since May 26. And Ether is over $3,000 again, after its first run above that level lasted for just a couple of weeks. 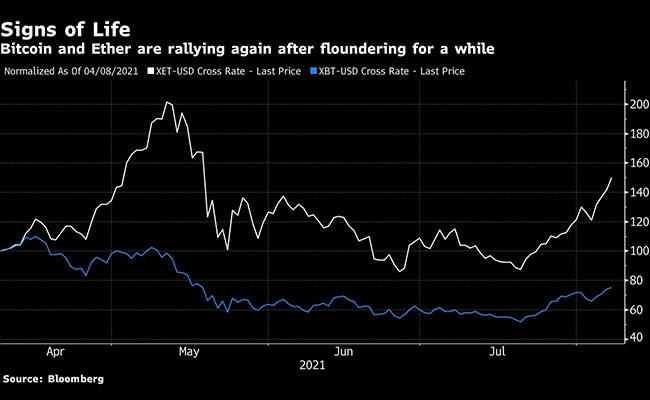 Bitcoin and Ether are rallying again after floundering for a while

One factor still creating uncertainty: The U.S. infrastructure bill making its way through Congress, which has dueling amendments that address reporting requirements for crypto transactions and tax collection. The bipartisan group that drew up the legislation was counting on the extra tax revenue generated to help pay for some of the bill’s costs.

Still, that isn’t stopping momentum in crypto, the market value of which has rallied back to around $1.88 trillion from a mid-June low of nearly $1.2 trillion, according to CoinGecko.com. Other tokens like Binance Coin, Cardano, XRP and Dogecoin have also rallied in the past week.