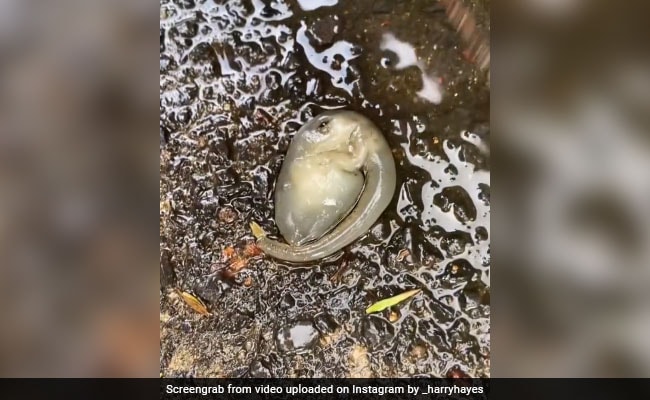 A small creature, found on the streets of Sydney, Australia, has stumped biologists, academics and social media users alike. Harry Hayes was jogging on Monday morning when he stumbled upon the creature, reports Ladbible. The city has been lashed by heavy rainfall in recent days, but the bizarre-looking animal was not found in a flood zone. Instead, Mr Hayes found it while jogging through the Marrickville suburb of Sydney.

“My gut says it’s some kind of embryo but with Covid, World War III, and the floods [going on right now] this could very well be an alien,” he said.

Mr Hayes posted a video of the creature on Instagram, from where it has spread to other social media platforms like Twitter. The footage shows him poking the creature with a stick, but it remains immobile.

News of the weird-looking creature — which many on social media described as an ‘alien’ — began to go viral after Lil Ahenkan, a popular Australian influencer, shared its pic on Instagram. “What is this?”
she captioned the pic.

“Shark embryo maybe? Or some other sea creature,” one person speculated. “That’s an alien,” said another.

Even biologists were left stumped by the odd-looking find. Biologist Ellie Elissa re-posted the picture on Instagram, asking for help in identifying the creature. “What in the what IS this thing? I thought possum/glider embryo but I have no context or scale and none of my peers can agree,” she wrote.

Hey world. What in the what IS this thing? I thought possum/glider embryo but I have no context or scale and none of my peers can agree. What is this? #mysteryblobhttps://t.co/86DAwrtQpD

A cuttlefish embryo, a germinating seed and mutated tadpole were all discarded as possible answers. When Ladbible reached out to University of Sydney and the University of New South Wales to identify the creature, none of the academics were able to identify it either.

Do you have any guesses as to what the creature could be?