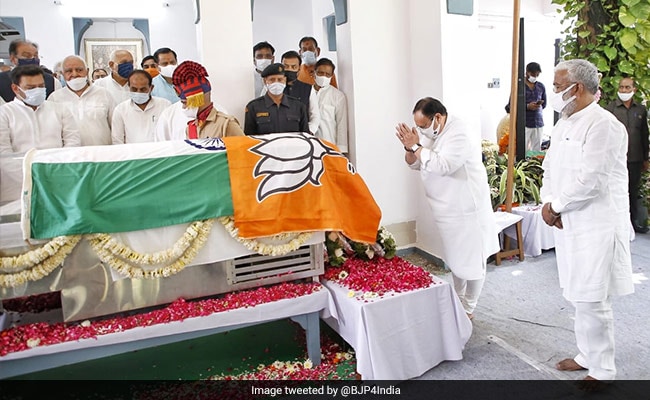 “India will not tolerate the insult to the national flag,” the Youth Congress tweeted.

A photograph of the tribute ceremony to former Uttar Pradesh Chief Minister Kalyan Singh is rapidly becoming the eye of the storm on social media. Kalyan Singh — the BJP veteran under whose watch the Babri Masjid was demolished — died yesterday at the age of 89.

Earlier today, Prime Minister Narendra Modi had visited Lucknow to pay his respects. Kalyan Singh was a valuable personality and a capable leader who became a “symbol of faith” for the common people, he had said. But later in the day, there was apparently some rearrangement of the bier.

Its photo, tweeted by the BJP, shows Kalyan Singh’s body lying in state, draped by the national flag. But half of it was seen to be covered up by the party flag of the BJP.

“Is it ok to place party flag over Indian flag in New India?” questioned Srivivas BV, the chief of the Youth Congress.

Is it ok to place party flag
over Indian flag in New India? pic.twitter.com/UTkfsTwUzz

“India will not tolerate the insult to the national flag,” the Youth Congress tweeted in Hindi from its official handle.

“Party above the Nation.Flag above the Tricolor. BJP as usual : no regret, no repentance, no sorrow, no grief,” tweeted Samajwadi Party spokesperson Ghanshyam Tiwari.

Party above the Nation.
Flag above the Tricolor.#BJP as usual :
no regret, no repentance, no sorrow, no grief.#NationalFlaghttps://t.co/3bUSiDPJXF

Section 2 of the Prevention of Insults to National Honour Act says, “Insults to Indian National Flag and Constitution of India”, says: “Whoever in any public place or in any other place within public view burns, mutilates, defaces, defiles, disfigures, destroys, tramples upon or otherwise shows disrespect to or brings into contempt (whether by words, either spoken or written, or by acts) the Indian National Flag or the Constitution of India or any part thereof, shall be punished with imprisonment for a term which may extend to three years, or with fine, or with both.”