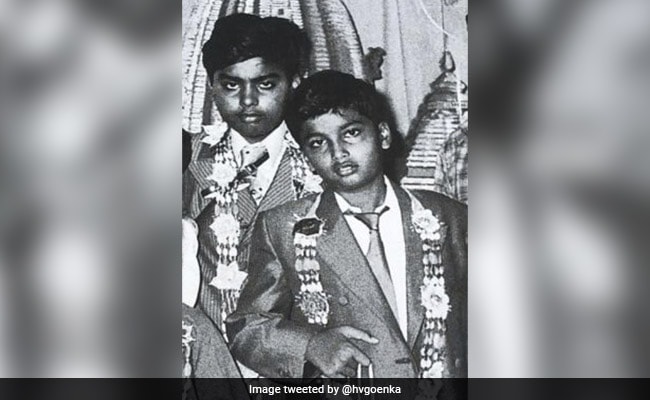 Industrialist Harsh Goenka on Monday challenged his Twitter followers to a guessing game. The Chairman of RPG Group shared a throwback picture of two brothers – with no other clues except for a cryptic “M&A” at the end. “Two brothers in their early days….M&A,” wrote Mr Goenka while sharing the black and white picture. The photo shows two young boys, dressed in formal suits with garlands around their necks. Take a look and see if you can guess who they are:

The throwback photo has racked up over 2,000 ‘likes’ on the microblogging platform. While a few people wondered if the ‘blast from the past’ featured Mr Goenka himself, others had no trouble recognising the duo as brothers Mukesh Ambani and Anil Ambani.

Mukesh and Anil Ambani are the sons of late industrialist Dhirubhai Ambani, who founded Reliance Industries. Mukesh Ambani, who is the elder of the two, held the title of India’s richest man for years until he was recently overtaken by Gautam Adani.

Some Twitter users shared other old photographs of the Ambani brothers.

Winners and losers have the same goals.

To be successful, you need systems, not goals.#sucess | #investing | #mindset | #processpic.twitter.com/NIOo4PO7Ba

Mukesh Ambani overall wealth is greater than the entire GDP of Belarus.
According to World Bank data Belarus GDP was around $59.6 billion in 2018. #MUKU 💜🙏 pic.twitter.com/WsnyVNW2Hg

One Twitter user claimed that the photograph shared by Harsh Goenka was published in a book by Kokilaben Ambani.

This is not the first time a guessing game has captured the attention of social media users. Recently, another industrialist shared a rare throwback from his personal album and revealed that he once wanted to be a filmmaker. Take a look at his black and white pic and see if you can figure out who that is.