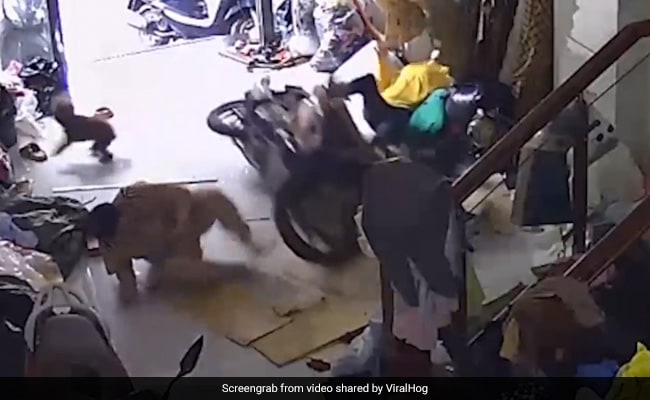 A motorcycle was filmed crashing inside a shop

The wild moment an out-of-control motorcycle crashed into a woman’s living room was captured on camera. CCTV footage from Vietnam shows the motorcycle, being driven by a woman in a yellow sweater, barreling inside the room where another woman sat on the floor, working. The impact of the moment was such that the rider was thrown off her bike and the woman sitting inside the room was forced to scramble for safety along with her dog.

The whole incident, which took place on February 24, Thursday, occurred in less than a minute. It happened in Vietnam’s Ho Chi Minh City. In the video, we see the rider crashing into the living room after having lost control of her vehicle. Her vehicle narrowly missed the dog who was sitting right near the door.

The security camera footage was shared with ViralHog, and the unnamed woman whose living room the vehicle launched into confirmed that no one was injured in the accident.

“The woman in the yellow sweater was riding on the street when she lost control of the bike and launched into my shop,” she said. “As you can see, my dog and I were sitting right there in the living room. Luckily, the dog was fine. No one was hurt in this case.”

Something similar happened last year when an out-of-control motorcycle crashed into a clothing store in Telangana. Customers at the shop were seen hurrying away as the bike crashed to a halt and its rider was catapulted over the counter in footage that had gone viral online.