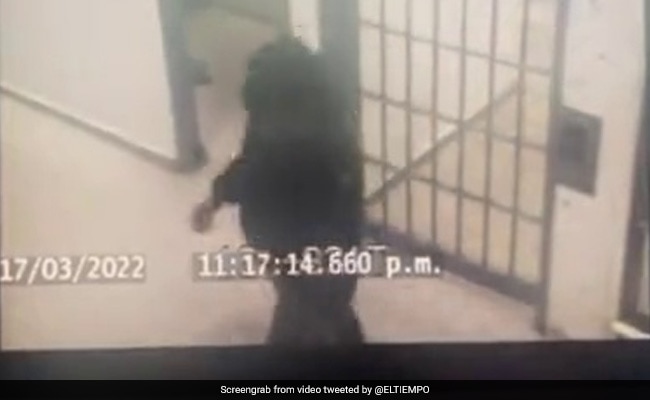 Juan Castro was recorded walking out of a maximum-security jail on Friday.

A Colombian drug lord escaped a maximum-security prison on Friday, and the incident was captured on surveillance cameras. Juan Castro, one of the leaders of the infamous Gulf Clan drug cartel, was filmed casually walking out of La Picota jail in Bogota while wearing a guard’s uniform. According to the BBC, a prison guard has since been arrested for aiding in his escape.

Juan Castro, who is also known by his alias “Matamba”, has been on the run since escaping early morning on Friday. He had been in jail since May 2021 and was awaiting extradition to the United States.

CCTV footage released by Colombia’s prison service shows him walking out of a door that was left open. According to the Daily Mail, Matamba walked through seven doors and managed to escape without incident. He wore a hooded jacket that covered his face.

A report in local newspaper El Tiempo suggests that Mr Castro returned to his prison cell at about 12.30 am on Friday. He then changed into a guard’s uniform and escaped the prison. The report also suggests that the cartel leader may have paid a bribe of $5 million to flee the maximum-security jail.

The prison director and 55 other guards have also been suspended for their involvement.

Juan Castro has been arrested at least 12 times and has escaped prison twice before this. In 2018, he went so far as to fake his own death while on medical leave from prison.