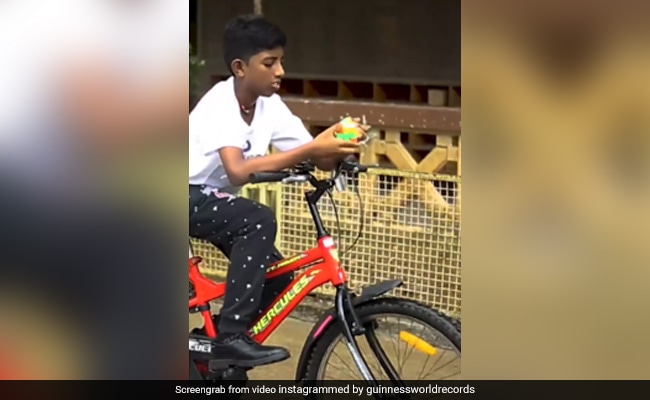 It took Jayadharshan Venkatesan a little over 14 seconds to solve the Rubik’s cube.

Solving the Rubik’s Cube is not a cakewalk. Many people who have attempted to solve it have either lost patience or interest after repeated failures. But a boy from Chennai solved the puzzle with unbelievable speed. Not just that – he solved a Rubik’s cube in mere seconds while riding a bicycle, a feat that has earned him a Guinness World Record.

Guiness World Records shared a video of Jayadharshan Venkatesan on Instagram, saying he solved a Rubik’s cube in just 14.32 seconds. The video showed Jayadharshan riding a bicycle and solving the Rubik’s Cube with both hands. He raised his hand the moment he finished the challenge.

“Speedcubing on a bicycle — 14.32 seconds by Jayadharshan Venkatesan (from India),” said  Guinness World Records in the caption.

The record keeper added, in a comment, that  Jayadharshan was working on his speed solving skills for two years until he was confident that he would be able to achieve this title.

Pointing at the boy’s expression, another said, “The lad isn’t even smiling, he means business”.

“Impressive for his age, but the original speed cube solver can break it with some practice if he/she knows how to ride a bicycle,” read a comment.

A person user drew attention towards Jayadharshan’s decision to combine cycling with solving the puzzle. “It’s nice to do it, but the combination of activities people do for world records is amazing”.

“Congrats dear…very proud,” wrote one of the viewers.

Two years ago, another person from Chennai had tried to enter the records book by solving the most number of Rubik’s cube underwater. Illayaram Sekar entered the Guinness World Records by solving six cubes in one breadth. He spent 2 minutes and 17 seconds underwater and beat the previous record of five Rubik’s cubes solved under water.