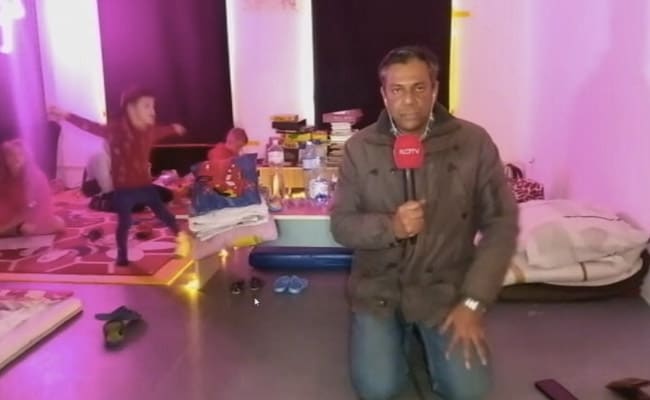 NDTV’s Vishnu Som at the children’s shelter in Lviv, Ukraine.

Russian forces advancing through Ukraine have destroyed many cities, forcing thousands to flee. Among them are children who were forced to leave capital Kyiv. Many of those are now living in a children’s shelter in Lviv in western Ukraine, about 540 kilometres from Kyiv.

NDTV’s Vishnu Som, reporting from Ukraine, visited the children’s shelter in Lviv to understand how they are living. But the somber mood outside had no effect on half a dozen children living there.

One young guest at the children’s shelter was particularly lively and cheerful and decided to dance through much of the broadcast, proving how resilient happiness can be even in the bleakest of times.

The child is also seen taking short breaks to listen to the NDTV report.

There is palpable tension in the area but Lviv has been unaffected by the bombing since Russia launched its invasion of Ukraine last week. However, sirens do go off in short intervals to warn people of the city.

Hundreds of thousands of people fleeing war in eastern Ukraine have poured through Lviv. The city has become not just a refuge, but a staging area for humanitarian aid.

Meanwhile, intense fighting is going on near the Zaporizhzhia nuclear plant in Enerhodar. A fire broke out in a training building near the largest nuclear power plant in Europe during the fighting, which was later extinguished.

US Energy Secretary Jennifer Granholm said there was no indication of elevated radiation levels at the Zaporizhzhia plant, which provides more than a fifth of total electricity generated in Ukraine.