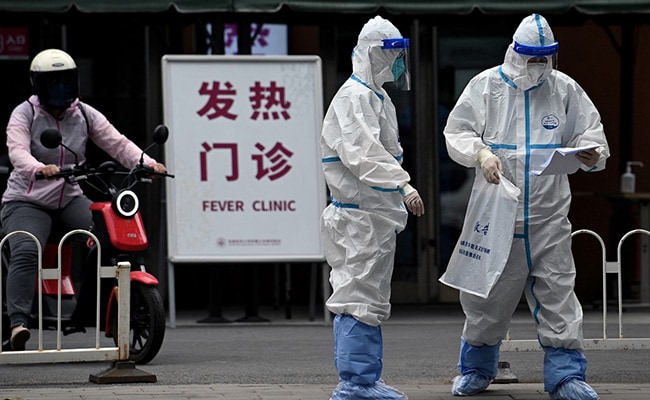 China’s economy continued to slow in December as the massive Covid-19 outbreak spread across the country, with activity slumping as more people stay home to try and avoid getting sick or to recover.

Bloomberg’s aggregate index of eight early indicators showed a contraction in activity in December from an already weak pace in November and the outlook is grim for the new year.

Although there’s no reliable data on the extent of the spread of the virus or the number of sick and dead now, it had reached every province before the end of extensive and regular testing. The canceling of almost all domestic restrictions now means the virus can circulate freely. 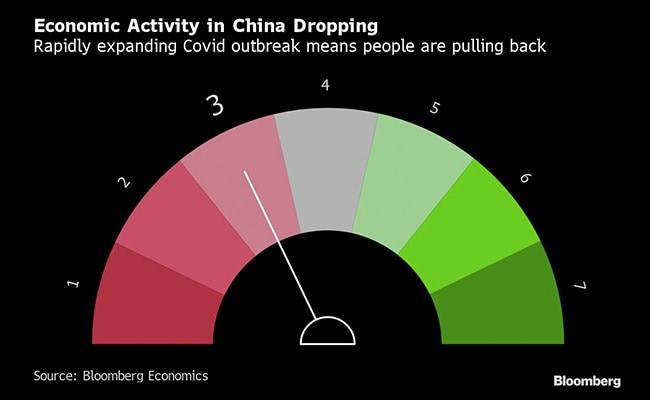 Even before the curbs were lifted, China’s economy was struggling, with a slump in consumer spending deepening and industrial output growing the slowest since the spring lockdowns.

The situation was even worse for shops and restaurants in Beijing than it was across the nation as a whole, with retail sales in the city dropping almost 18% in November as both cases and restrictions in the capital increased. 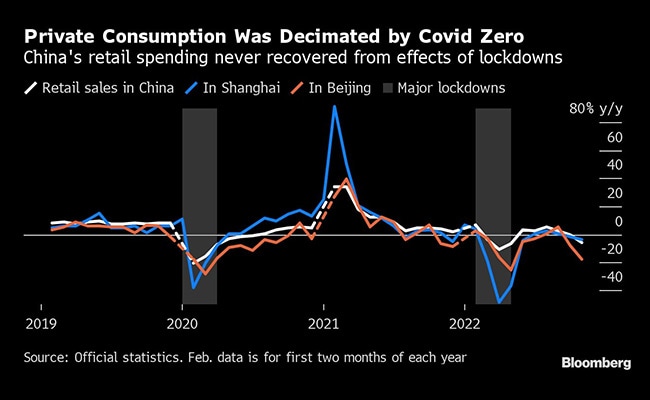 However even though people are now free to move around there’s been little rebound in movement so far this month, according to high-frequency data on subway and road usage.

The 3.6 million trips made on the Beijing subway last Thursday were 70% below the level on the same day in 2019, and traffic congestion on the city’s streets was only 30% of the level in January 2021, according to BloombergNEF. Other major cities such as Chongqing, Guangzhou, Shanghai, Tianjin and Wuhan are seeing a similar drop.

That looks to be impacting home and car sales, which both fell in the first weeks of this month. Car sales had been supported by government subsidies and were a bright spot for consumer spending this year, but began dropping last month as consumers pulled back. That in turn hit industrial output, with production of cars dropping for the first time since May, when many factories were forced to close.

However unlike in the spring when it was the Covid Zero policy which caused a shortage of car parts and shuttered some plants, now it is the virus itself which is impacting production, with companies having to deal with more workers getting sick. 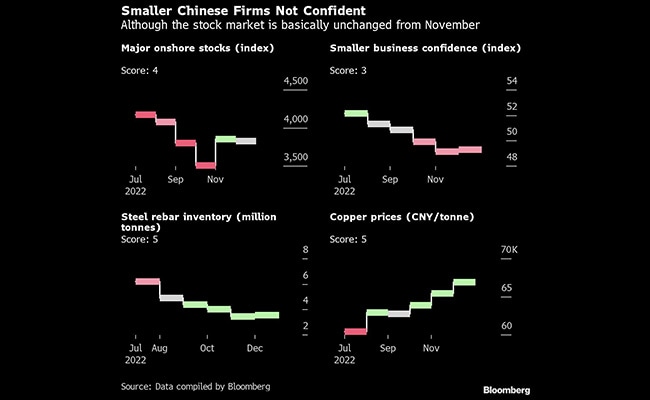 The spread of the virus across China has undermined the initial euphoria seen in the stock and commodity markets at the reopening. The Shanghai Composite Index has fallen back near the level it was at just before authorities started relaxing curbs on Nov. 11 and has dropped for the past two weeks.

The price of iron ore was also headed for a modest weekly drop as a surge in Covid cases clouded the near-term demand outlook and undermined the effect of recent announcements of support for the real-estate sector. Chinese steel mills are currently reducing production, Guangfa Futures said in a note, with data from an industry association showing output falling and stockpiles rising in the middle of this month. 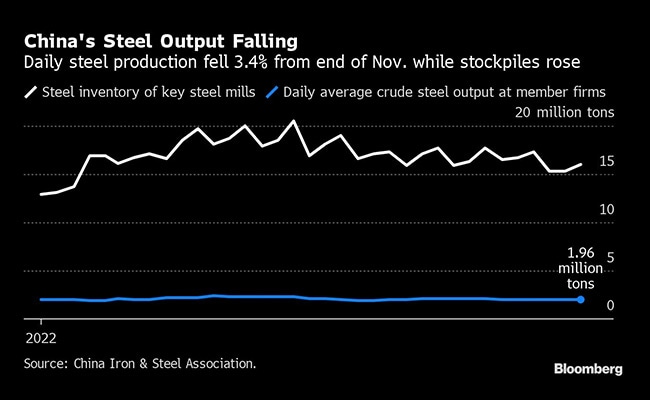 The drop in markets mirrors the poor confidence among small businesses, which was in contractionary territory for a third straight month in December, according to Standard Chartered Plc. Although there was a small improvement from November, the main indexes still showed smaller firms weren’t optimistic about the current situation or the future.

The manufacturing sector saw some improvement, with a rise in new orders, sales and production from November “likely reflecting the positive impact of the relaxation of Covid control,” the firm’s economists Hunter Chan and Ding Shuang wrote in the report.

However, “services SMEs continued to face headwinds from weak consumer sentiment amid rising Covid cases,” they wrote in a report last week.

There’s little good news for Chinese firms overseas, with the drop in global trade extending into December, according to early Korean data. That means that China’s exports may fall for a third straight month.

The almost 27% drop in Korean exports to China in the first 20 days of this month shows the weakness of Chinese demand for semiconductors, which has been falling due to a slump in domestic and overseas demand for smartphones and other devices.

Bloomberg Economics generates the overall activity reading by aggregating a three-month weighted average of the monthly changes of eight indicators, which are based on business surveys or market prices.