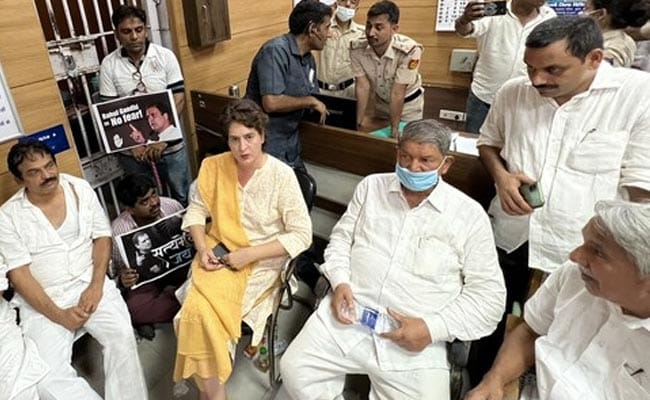 Congress alleged that some of its leaders were manhandled by the police during protest.

Top Congress leaders detained on Monday during the party’s protest in solidarity with Rahul Gandhi, who was grilled by the ED in a money-laundering probe linked to the National Herald newspaper, were released from various police stations after almost 11 hours.

Sources said many Congress MPs who were detained for violating CrPC Section 144 were released around 11.30 pm soon after Rahul Gandhi left the Enforcement Directorate office after over 10 hours of questioning.

The MPs who were detained for over 11 hours include Adhir Ranjan Chowdhury, K C Venugopal, Randeep Surjewala and Harish Rawat.

Mr Surjewala had earlier alleged that were kept under “illegal” detention in violation of the law under the Narendra Modi regime. A video showed Mr Chowdhury and Mr Venugopal asking the police to either arrest them or release them immediately.

“We are Members of Parliament. How can you detain us? Arrest us. We are ready to go to the court,” Mr Venugopal was heard telling the police in the video.

Mr Chowdhury told the police, “You cannot illegally detain us like this. Either arrest us or release us now.” Harish Rawat also put out a video saying they were not released from police detention and have to wait till Rahul Gandhi leaves the ED office. Soon after, the police opened the gates of the Tughlak Road police station, releasing around 10 MPs.

Congress whip in the Lok Sabha Manickam Tagore, in a tweet, said, “We were released at 11.45 pm from Mandir Marg Police Station. If Shah and gang think that they can silence the Congress then it’s completely wrong. We will fight back. Our leader is Rahul Gandhi.”

The Delhi Police on Monday detained 459 Congress workers and senior leaders, including Adhir Ranjan Chowdhury, K C Venugopal and Mallikarjun Kharge, for not following police directions for the maintenance of law and order in the national capital, officials said.

They also said that allegations of manhandling and injuries to protesting Congress leaders during police action will be diligently looked into.

Hundreds of Congress workers in Delhi took to the streets and several senior leaders were detained amid a massive show of strength by the party which had called for a Satyagrah march against the ED’s questioning of Rahul Gandhi.

The opposition party alleged that some of its leaders were manhandled by the police. It lashed out at the government for “not allowing” peaceful protests.

Taking to Twitter, senior Congress leader P Chidambaran said, “When three big, burly policemen crash into you, you are lucky to get away with a suspected hairline crack! Doctors have said that if there is a hairline crack, it will heal by itself in about 10 days. I am fine and I will go about my work tomorrow.”