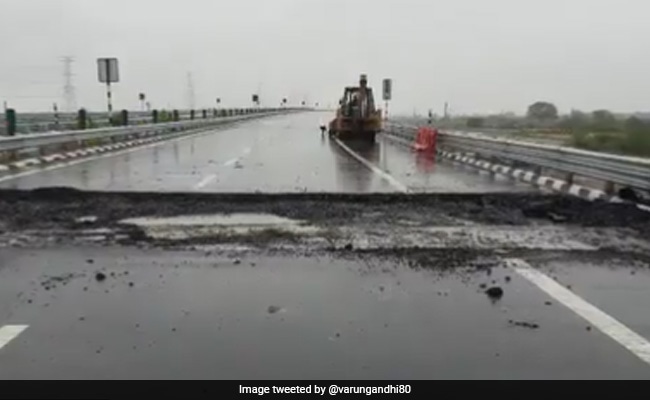 PM Modi had inaugurated the expressway on July 16.

The pitiful condition of a brand-new expressway in Uttar Pradesh, inaugurated last week by Prime Minister Narendra Modi, gave ammunition to the opposition to attack the BJP-led central government on Thursday. BJP MP Varun Gandhi, who has been openly critical of his own party, too joined the ranks of critics and questioned the quality of the construction work.

“If the expressway built at a cost of Rs 15,000 crore couldn’t withstand even five days of rain, then serious questions rise on its quality,” he said in a Hindi tweet.

Parts of the 296-km long Bundelkhand Expressway caved in at Chhiriya Salempur near Jalaun district and deep potholes were seen on it after heavy rain on Thursday.

Varun Gandhi also sought action against the officials and the companies concerned. “The head of the project, the engineer concerned and responsible companies should be summoned and action be taken against them,” he said.

Several bulldozers were seen on the damaged stretches of the road for repair work. The potholes were repaired instantly and the road opened to traffic, said an official.

Samajwadi Party Chief Akhilesh Yadav also criticised the BJP over the expressway, calling it “a sample of the quality of BJP’s half-hearted development”.

“The Bundelkhand expressway was inaugurated by big people and within a week, huge pit of corruption came out on it,” he tweeted.

PM Modi had inaugurated the expressway on July 16. The four-lane expressway connects Bharatkoop in Chitrakoot with Kudrel in Etawah, passing through seven districts.

The UP Congress also targeted the BJP government on Twitter, saying the new expressway built by those who promised a “pothole-free” Uttar Pradesh has become “pothole-ridden”. The development has taken a hit after four days of inauguration of the Bundelkhand expressway, it said.

The road would link the Bundelkhand area to “a fast and smooth traffic corridor”, comprising the Agra-Lucknow and Yamuna expressways, according to the state’s expressway authority,