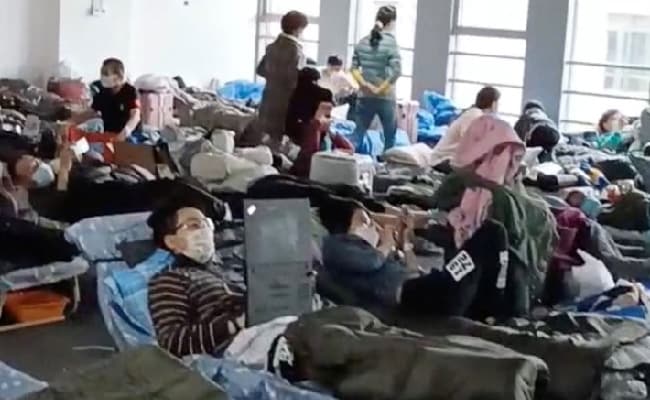 Under China’s zero-COVID policy, everyone who tests positive must quarantine at designated sites.

Separated by less than an arm’s length, people at a quarantine facility in the Chinese city of Shanghai after testing positive for COVID-19 lie in rows of grey camp beds, suitcases and other belongings strewn next to them.

Video provided to Reuters on Thursday by an occupant of the facility showed more than 100 people crammed on a floor of what looked like an office building, one of dozens of places the city has converted into quarantine centres in its battle to stem the spread of the Omicron coronavirus variant.

“This centre is so crowded, everyone is less than a metre apart,” said the woman, aged over 60, who filmed the video and provided it to Reuters.

The woman, who declined to be identified, said there were at least 200 people in the facility, including young children, sharing four toilets. There are no showers and they got just plain bread for breakfast, she said.

People whiled away the hours playing on their mobile phones or chatting, the video showed.

Under China’s zero-COVID policy, everyone who tests positive must quarantine at designated sites.

Shanghai is doubling down on the policy, converting schools, recently finished apartment blocks and exhibition halls into quarantine centres, the largest of which can hold 50,000 people.

Authorities said last week they had set up more than 60 facilities. But the conditions vary widely and some have drawn howls of criticism from the public.

The Shanghai government did not immediately respond to a request for comment about conditions at the facilities.

Authorities have not provided details on the numbers of people in quarantine but the city has recorded more than 280,000 COVID infections since March.

While state media shows hospitals with just two or three patients per room, people sent to Shanghai’s exhibition centres live side by side with thousands of others, without walls or showers, and with ceiling lights on around the clock.

Videos clips on social media have shown an empty factory with camp beds installed and another site made out of shipping containers. Reuters verified the video of the factory but not of the containers.

To get out of quarantine, people have to produce two consecutive negative PCR tests.

The woman who provided the video said she had been transferred there from a hotel facility with better conditions, where she had been staying for about 20 days.

While there had tested negative once but now she feared she could get infected again.

“There are people here who are positive, who are coughing and running fevers – how can you mix the positive and negatives together?” she asked.