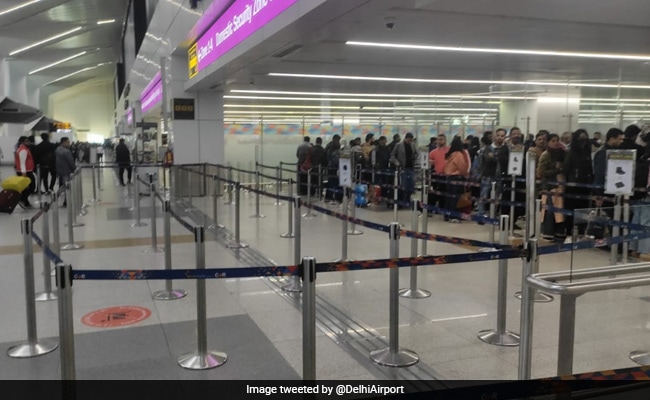 Following days of long queues and check-in delays, the Delhi airport’s management informed today that the average waiting time for passengers has been brought down to between 7-8 minutes at the international terminal.

The Delhi Airport’s official Twitter handle also had a “smart travel tip” for fliers, asking them to carry only one bag as cabin luggage.

In its update at 10.30 am, Delhi Airport tweeted, “Swift passenger movement at the security check area at terminal 3, with an average waiting time of 7-8 minutes. Smart Travel Tip: For a smoother and faster security clearance, passenger shall carry only one hand baggage as their cabin luggage.”

The airport authorities have been sharing hourly updates on the waiting time at the airport, following days of chaos, serpentine queues and angry social media posts slamming the mismanagement at the country’s busiest airport.

The flood of complaints promoted Civil Aviation Minister Jyoriraditya Scindia to visit the airport for a check. The minister said the passenger footfall has seen a jump after the lifting of Covid restrictions and assured that better crowd management would be in place soon.

The airport management and the aviation ministry also came up with a four-point plan to decongest the airport. This included adding x-ray screening systems and more manpower at key areas.

The crowding at the airport had led to angry complaints of mismanagements and last-minute panic for passengers. Air carrier IndiGo had asked its passengers to reach the airport 3.5 hours prior to domestic departures.