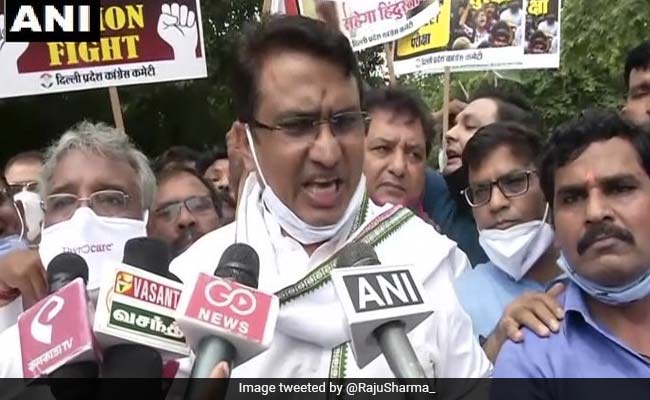 Delhi Congress members led by unit president Anil Kumar staged a sit-in at Jantar Mantar here on Wednesday against a bill that seeks to grant more powers to the lieutenant governor of the national capital, demanding that the government withdraw it.

The Government of National Capital Territory of Delhi (Amendment) Bill, 2021 was introduced in Lok Sabha by Union Minister of State for Home G Kishan Reddy on Monday.

“We are protesting against autocracy of the Centre and the murder of democracy in Delhi through this bill,” Mr Kumar said.

Though the Congress does not have a Member of Parliament or an MLA from Delhi, the party was the first to speak against the bill as a “responsible opposition”, he claimed.

“We are concerned about the welfare of the people of Delhi,” the Congress leader said, claiming that the bill “will make a mockery of the people’s power to elect a government and representatives of their choice”.

The amendment bill, if passed by Parliament, will allow the Centre to “remote-control” the Delhi government through the Lt governor, Mr Kumar charged.

The ruling Aam Aadmi Party (AAP), led by its convener and Delhi Chief Minister Arvind Kejriwal, also staged a protest against the bill at Jantar Mantar.

“The Centre wants to weaken us through the GNCTD (Amendment) Bill, but we will keep struggling for welfare of people,” Mr Kejriwal said.

The Delhi Congress president said his party will create a mass movement if the “draconian” bill is not withdrawn by the Centre.

According to the GNCTD (Amendment) Bill, the “government” in the city would mean the “Lieutenant Governor” in context of any law made by the legislative assembly.

The bill also makes it mandatory for the Delhi government to take the opinion of the L-G before any executive action.