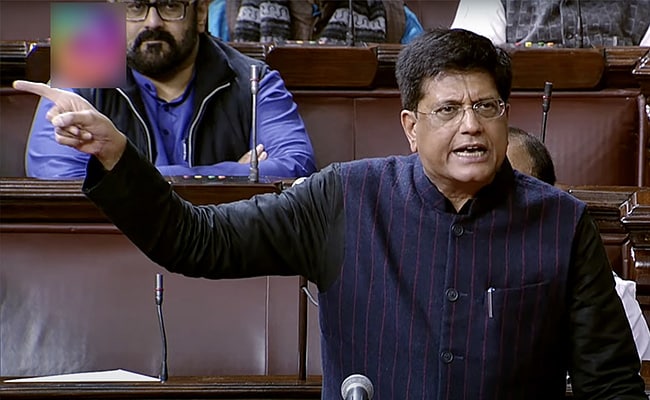 Union Minister Piyush Goyal today withdrew a controversial comment on Bihar that had provoked protests in parliament by MPs of the state and demands for his apology.

The minister had made the comment when RJD member Manoj Jha was speaking on inflation in Rajya Sabha on Tuesday.

Interrupting Mr Jha, Piyush Goyal had said: “Inka bas chale to desh ko Bihar bana dein (if he had his way, he would turn the entire country into Bihar)”.

Mr Jha protested immediately. “Sir, this is an insult to Bihar. Piyush ji, with folded hands I urge you, say whatever you want to about me, but please don’t comment on Bihar,” he said.

This morning, Piyush Goyal put out a clarification as Bihar MPs pressed for his apology.

“Let me clarify that I had absolutely no intention of insulting either Bihar or the people of Bihar. If it has hurt anyone’s sentiment, I immediately withdraw that statement,” he said.

Bihar MPs accused Mr Goyal of demeaning their state by using it as a pejorative term.

“Piyush Goyal, apologise. We will not tolerate the insult of Bihar,” MPs shouted while protesting at parliament this morning.

Yesterday, Bihar Deputy Chief Minister Tejashwi Yadav shared the clip of the exchange between his party MP and Mr Goyal.

“Look at the insult of Bihar and Biharis by an unwise and arrogant (vivekheen aur ahankari) Union minister. Projects worth Rs 2.5 lakh crore were taken away from his home state Maharashtra to Gujarat and he could not utter a word. This shows his standing,” Tejashwi Yadav said on Twitter.

Manoj Jha has written to Vice President Jagdeep Dhankhar, the Rajya Sabha chairman, demanding an apology from the minister and urging him to remove the comment that, he said, was uncalled for and smacked of “elitism”.

Mr Jha said Mr Goyal had shown insensitivity towards Bihar and complained that the people of Bihar were “always treated like second class citizens”.

“I request you to expunge his statement and take necessary steps so that no other state in the country is subjected to such treatment by the Union Government,” Mr Jha wrote.