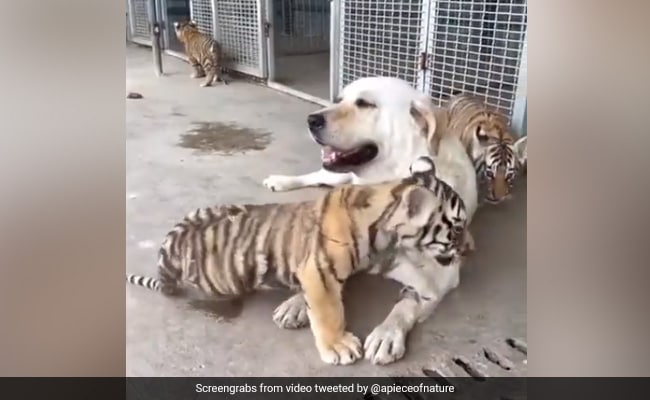 The Labrador dog with the three tiger cubs.

All of us have heard that love can transcend all boundaries. A video of a dog going viral on social media shows exactly that.

In the video, a Labrador dog is seen taking care of three tiger cubs abandoned by their mother in a zoo. The internet is amazed at the bond between the cubs and their foster mother.

The video has been shot in China and shows the tiger cubs playing around the dog. It also says that the mother of these cubs refused to feed them soon after birth.

Because you want to see a lab doggy take care of baby rescue tigers
pic.twitter.com/qmKnyO4Fzi

Since being shared by A Piece of Nature on Twitter on Sunday, the video has received more than 16,000 views. It was originally shared on Instagram on April 27.

Twitter users, many of them dog lovers, have poured their hearts out. “Labs are pure blessings,” tweeted a user.

“They love their new mom.. let them grow,” said an Instagram user. “Tiger and dog. Different species but love remains the same,” added another.

A female tiger abandoning its cubs is not something unheard of. There are many reasons, as listed by National Tiger Conservation Authority (NTCA) in its Standard Operating Procedure (SOP) booklet for all tiger reserves.

Apart from the death of mother tiger, cubs are also abandoned if they are weak, incapacitated, injured or sick, according to NTA guidelines.

Some female tigers also leave their young ones due to their inability to feed owing to an injury.

Last year, the story of an abandoned black panther raised by a Rottweiler in Siberia went viral.

Luna, the panther, was born into a travelling zoo, but its mother rejected the cub just a week after its birth. With no resources to look after baby panther, the zoo approached Victoria, an expert in rehabilitating wild cats.

She took the black panther home. Venza, her Rottweiler, took good care of its sister, helping it grow.