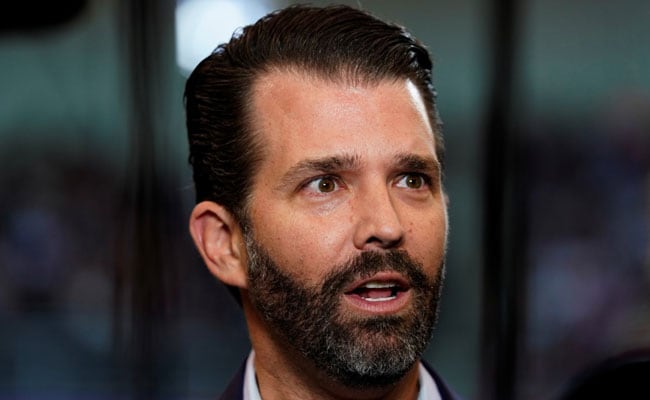 Donald Trump Junior did not say when, if at all, his father would be back on Twitter. (File)

On Donald Trump’s bid to again become the US president in the 2024 election, his son today said the fight is between someone who “works for the real American worker” against “the billionaire class that wants a president who answers to them again”.

In India on a business trip for his billion-dollar realty projects, Donald Trump Junior repeated the unsubstantiated allegation that the 2020 election — which his father, as incumbent, lost to the Democratic Party’s Joe Biden — was “stolen” by what he called “ballot harvesting”. He also said that his father has been a victim of a “witch hunt”.

He said the US midterm Senate polls, in which most of the Trump-backed Republican candidates lost, won’t affect the 2024 race. “I don’t think Republicans are losing on issues right now,” he told NDTV, “The Democrats… what have they done for Americans? Gas (petrol) prices are doubled, interest rates are going through the roof, inflation is crushing people.”

Latest data shows that price-rise of wholesale items slowed down a bit, down to 7.4 per cent in November as compared to 8.1 per cent in October,, but was still slightly worse than expectations.

The Russia-Ukraine conflict is seen as the major factor affecting the US and the global economy.

Trump Jr referred to that, blaming “things that are being pushed [by the Biden administration], like. ‘Let’s get into a war with Russia.'”

He also criticised what he called “sexualisation of children”, and remarked sarcastically: “Last I checked, there were — what — some ‘9,276’ genders. I don’t think the average American is buying that.”

On his father’s chances in 2024, he claimed, “When you have a Trump, who got things done, who moved the economy, it was for the real American worker. That’s where he moved the needle. What I see now is, the billionaire class wants a president who answers to them again. They want someone that, when they call, that person jumps. They want to do that in the guise of helping the little American, the average worker; but that’s not what happens in practice.”

He added, “That donor class the elite class wants to reclaim the power that they had, that Trump took away because he didn’t need them, because he was Trump.”

Asked about his sister Ivanka and her husband Jared Kushner — key players in the Trump era — opting out of campaigning this time, Trump Jr first denied that the controversies of the previous term had anything to do with that. He added, “Doing politics, I have realised that I have the stomach for it. Not everyone does. It is brutal. It is a vicious game. Ivanka and Jared were incredibly committed to that, but to do that again is… it is [brutal].”

On whether his father would be back on Twitter after he was banned allegedly for encouraging violent actions by his followers, Trump Jr did not give a straight answer, but said, “He has built his own social media platform TruthSocial.”