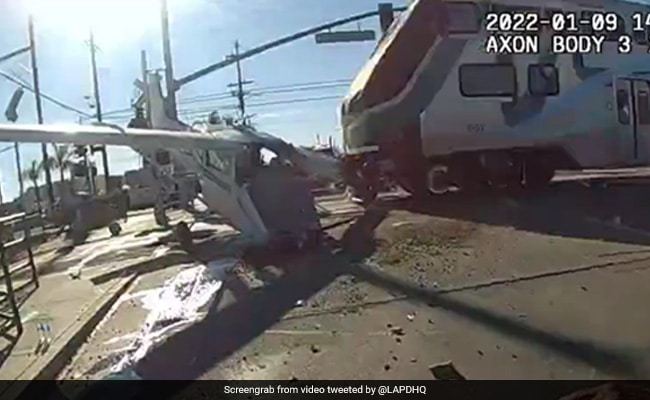 A viral video shows a train slamming into a crashed airplane in Los Angeles.

“Go, go, go,” someone was heard screaming as cops dragged the pilot out of the airplane and away from the oncoming train. Moments later, the camera panned to show the train slamming into the crashed aircraft. According to NPR, the plane crash occurred on railway tracks that run parallel to the runway at Whiteman Airport in the Pacoima neighbourhood of Los Angeles, California.

The footage was shared on social media by the Los Angeles Police Department (LAPD) on Sunday, where it has since gone viral with millions of views. Watch it below:

(Disclaimer: Content in this video could be disturbing for viewers.)

Foothill Division Officers displayed heroism and quick action by saving the life of a pilot who made an emergency landing on the railroad tracks at San Fernando Rd. and Osborne St., just before an oncoming train collided with the aircraft. pic.twitter.com/DDxtGGIIMo

The video has collected over 3.4 million views on Twitter, along with hundreds of comments praising the cops for their quick thinking and presence of mind.

“It wasn’t until I heard one of my coworkers behind me say, ‘The train is coming and we need to get him out now,'” Officer Christopher Aboyte told CNN, adding that he was so focused on getting the pilot out that he never actually turned to see the train.

The incident occurred after the plane “lost power” and “crashed onto tracks”, according to the LAPD Operations-Valley Bureau. The pilot, who was the only person on board, was rushed to the hospital and is now in stable condition.