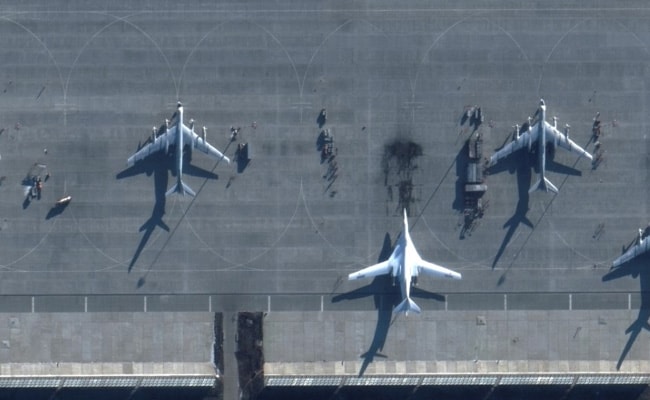 Neither side has produced concrete evidence of what kinds of weapons were used. (File)

Twin strikes on air bases deep inside Russian territory have dealt Moscow a major reputational blow and raised questions about why its defences failed, analysts said, as attention turned to the use of drones in the war between neighbours.

Neither side has produced concrete evidence of what kinds of weapons were used and who was behind the attacks.

But the Russian statements suggested Ukraine may have used a Tupolev Tu-141 or Tu-143 reconnaissance drone, which date to the 1970s but could have been carrying explosives this time, according to some experts.

Kyiv also said on Sunday it was making progress with a new indigenous combat drone with a range of 1,000 km (665 miles).

Moscow said Monday’s attacks killed three of its servicemen and wounded four more, as well as damaging two warplanes. On Tuesday, a third Russian airfield in Kursk, which lies closer to Ukraine, was set ablaze in another drone strike.

Military analysts saw the attacks as Kyiv’s response to Russia on the same day that Moscow conducted another wave of missile strikes on critical infrastructure in Ukraine.

It remains to be seen whether Russia seeks to retaliate; it unleashed the first wave of its bombardment campaign shortly after an attack on a key bridge leading to annexed Crimea that it said was organised by Ukrainian military intelligence.

“It’s a bigger image blow than a military one,” said Oleh Zhdanov, a military analyst based in Kyiv. “It means there are no sites in western Russia that are out of Ukraine’s reach.”

The damage to the warplanes sparked renewed grumbling among Russia’s military bloggers, whose social media posts can provide a window into the mood in Russia on the course of the war unleashed by Russia’s invasion of Ukraine in February.

“And I, a naive civilian fool, thought that planes were kept under concrete shelters during war …, no?” wrote Russian military blogger Vladlen Tatarsky. “It turns out that small drones, the danger from which was so neglected, can attack strategic aircraft.”

The analysts said it was unclear why Russia’s sophisticated air defences had failed to spot the threat and nullify it, if indeed Kyiv did use an old Tupolev reconnaissance drone.

“It would be visible on radars: the question arises of how this drone could fly from Ukraine through Russian territory and not be visible to S-400 units and hit strategic bombers at a military site,” said Oleksandr Musiyenko, another Kyiv analyst.

“We could conclude that Russian air defences cannot guarantee the protection of their strategic aerodromes and that they effectively admit this,” he said.

Musiyenko added: “It’s a moment for Russia to wonder about continuing to conduct missile strikes on Ukrainian territory. Because, we now see that explosions can happen on their aerodromes, too.”

It was not the first time Russia accused Ukraine of using such drones for attacks inside its borders.

The Defence Ministry in Moscow said Ukraine used Tupolev Tu-143 drones laden with explosives in July to conduct strikes in the southern Russian regions of Belgorod and Kursk that border on Ukraine.

Kyiv has been talking for weeks about the idea of developing an “army of drones”, and its defence minister told Reuters he regarded unmanned aerial vehicles and drones as the future of modern warfare.

Over the weekend, Ukrainian arms manufacturer Ukroboronprom said it had completed a number of successful tests on a new combat drone with a range of 1,000 km. The company plans to test it in conditions of electronic jamming, the state-run Ukrinform news agency reported.

Russia has used its vast superiority in long-range missile capabilities to unleash wave after wave of aerial attacks on Ukraine’s power grid, causing massive outages in what Kyiv says is a brutal attempt to try to break public resolve to fight. Moscow says its attacks are legitimate.

In an opinion piece on Nov. 29, Ukroboronprom’s general director Yuriy Gusev called for an “asymmetrical response” by the Ukrainian army to Russian missile volleys.

“We are currently limited in long-range high-precision weapons. But our armed forces must give a decent asymmetrical response to missile terror from the Russian Federation,” he said.

“Aerial unmanned systems come in handy, and the President of Ukraine Volodymyr Zelenskiy is paying special attention to their development.”