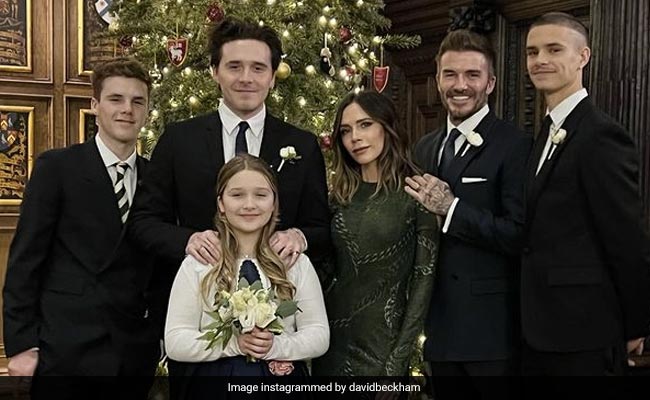 David Beckham left fans amused after he was spotted standing on tiptoes in his family’s Christmas pic. The Christmas image features David Beckham, his wife Victoria, and their children Romeo, Brooklyn, Harper and Cruz. The football star, 46, was photographed standing next to his son Romeo, who is also a professional footballer. Romeo, 19, towered above everyone else in the pic, leading fans to theorise that David Beckham had been trying to add a few inches to his height as he stood next to his son.

Both David Beckham and his wife Victoria shared the pic on their respective Instagram pages two days ago. “Merry Christmas,” the former footballer wrote while sharing the pic.

Since being posted, the pic has been flooded with comments from eagle-eyed fans who were amused to see the British footballer on his tiptoes.

“David on his tip toes,” one Instagram user remarked.

“Love the family photo, AND the tip toes,” said another, adding a laughing face emoji.

“David why are you standing on your tiptoes?” a person asked.

“So cute. He’s trying to match his son’s height,” another quipped.

The Beckhams seem to be quite competitive about their heights. In fact, David Beckham had grudgingly admitted to be shorter than his son Romeo last year.

In an Instagram message on his son’s 18th birthday, he wrote: “Happy 18th to my little man (or not so little anymore). You have grown into the most beautiful person and that as you say yourself ( a man finally).

“We love you so much never give up on your dreams & goals, this shows from day one in my arms with the song you were born to up until our latest moment where yes I had to finally admit my son is taller than me.”

David Beckham’s professional career began with Manchester United at the age of 17. In his impressive career spanning two decades, he won 19 major trophies.