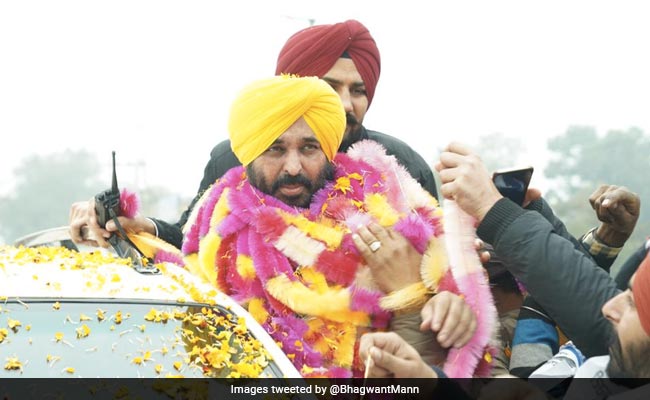 Bhagwant Mann launched his campaign for Punjab assembly elections from Sangrur on Sunday.

The Election Commission of India today sent a notice to Aam Aadmi Party Chief Ministerial candidate Bhagwant Mann for violating protocols regarding Covid-19 that were issued by it earlier this month. Mr Mann, who is also the party’s Punjab chief and a Member of Parliament from Sangrur, on Sunday launched his campaign to contest the upcoming Punjab assembly elections from the Dhuri assembly seat.

A large crowd had welcomed him in various villages, raising slogans and showering flowers. The party claimed that they had invited only a few locals but a large number turned out as the news of his visit spread on social media.

The election body had on January 8, while announcing the poll dates, issued revised “broad guidelines” in view of Covid-19 that banned roadshows and rallies till January 15. The ban was extended till the end of this month on Saturday.

Punjab will vote in a single phase for 117 seats on February 20, the counting of votes will be done on March 10.

Here are the Live Updates on Assembly Elections 2022:

Get NDTV UpdatesTurn on notifications to receive alerts as this story develops.

According to AAP, Chadha wants to discuss the recent facts that have emerged after the raids conducted by the Enforcement Directorate at the residence of CM’s relatives in connection with illegal sand mining.

The Enforcement Directorate on Wednesday seized more than Rs 10 crore cash, gold worth above 21 lakh and a Rolex watch worth Rs 12 lakh from the residential premises of land mafia Bhupinder Singh Honey and others in connection with an alleged illegal sand mining case.

Bhupinder Singh Honey is a nephew of the Punjab Chief Minister.