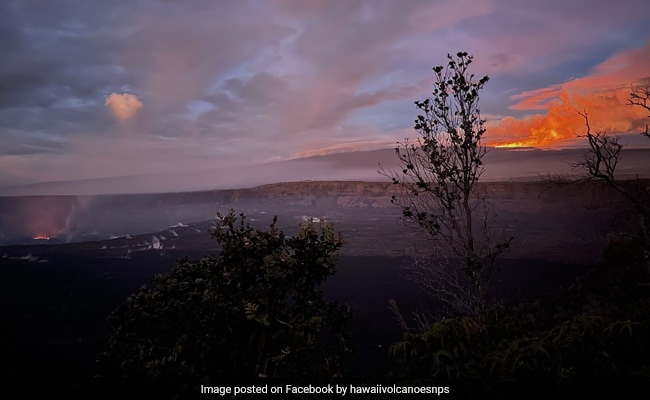 Neither eruption is threatening homes or infrastructure at this time.

Hawaii’s Mauna Loa, the world’s largest active volcano, began erupting on Sunday for the first time since 1984, ending its longest quiet period in recorded history. It joined its neighboring volcano, Kilauea, which has been erupting for more than a year.

The Hawaii Volcanoes National Park stated in a Facebook post that the unusual dual-eruption event is anticipated to draw a large number of tourists eager to see their molten flows. According to CNN, despite being only 21 miles apart, the two volcanoes have not erupted simultaneously since Mauna Loa’s last eruption in 1984. Both, according to the park, are not currently a threat to nearby homes or infrastructure, but state health officials issued a warning about potential effects on air quality.

According to the US Geological Survey, most of the eruption is now occurring in the Northeast Rift Zone of Mauna Loa, where lava is spewing from at least one volcanic split. The agency warned that volcanic gas, fine ash, and Pele’s Hair, which are strands of volcanic glass, could be carried downwind.

“Based on past events, the early stages of a Mauna Loa rift zone eruption can be very dynamic, and the location and advance of lava flows can change rapidly,” the geological survey said in a recent update.

According to the US Geological Survey, Kilauea, a smaller volcano situated on Mauna Loa’s southeast flank, has been erupting since September 2021, however its lava is contained to its crater. As per a report in CNN, more than 700 homes were destroyed and families were displaced when the extremely active volcano erupted for months in Leilani Estates in 2018.

Neither eruption is threatening homes or infrastructure at this time. “Kilauea has been erupting since Sept. 29, 2021 with lava confined to the summit lava lake,” the park stated.