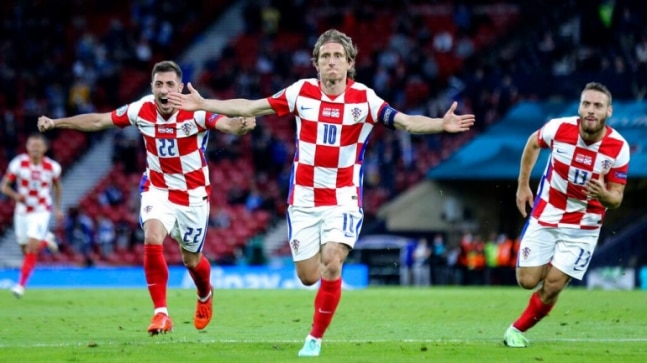 Luka Modric fired Croatia into the Round of 16 after scoring in the 62nd minute in his team’s 3-1 versus Scotland in Glasgow on Tuesday.

The Real Madrid star lurked on the edge of the area, waiting for the ball to come to him before stroking it into the top corner with the outside of his boot. At 35, he also became Croatia’s youngest and oldest goalscorer. Modric had scored his first in 2008 against Austria.

Modric had a quiet first two group matches against England and Czech Republic, with the midfielder forced into deeper positions and Croatia facing criticism for lacking spark in attack. But the playmaker in front of roaring Scotland fans showed his class and why he won the Ballon d’Or in 2018 — the same year he helped his team reach the World Cup final.

The 35-year-old fell to his knees at the final whistle for about a minute before rising to his feet and pumping his fists in celebration. Croatia’s two other goals came from winger Nikola Vlai’s low shot from close range in the 17th minute and Ivan Perii’s flicked header in the 77th.

Scotland, who scored their only goal of the tournament through Callum McGregor, finished at the bottom of Group D.

Croatia next face the runner-up of Group E – where Sweden, Slovakia, Spain and Poland are all still hustling for position in Copenhagen on June 28.

Elsewhere in London, Raheem Sterling scored his second goal at Euro 2020 on Tuesday to secure a 1-0 victory over the Czech Republic at Wembley Stadium. Both teams had already qualified for the round of 16.

The Manchester City player is stepping up as Tottenham Hotspur striker Harry Kane endures a barren run in front of goal.

The England captain, however, managed his first shot on target of Euro 2020 against the Czechs after failing to do so against Croatia and in the 0-0 draw with Scotland.

The goals in Glasgow had big implications for the Czechs, who dropped from first place to third and are uncertain about where their last-16 game will be.

England, the winners of Group D, will return to Wembley on Tuesday to face the runners up from Group E likely to be France, Germany or Portuga.