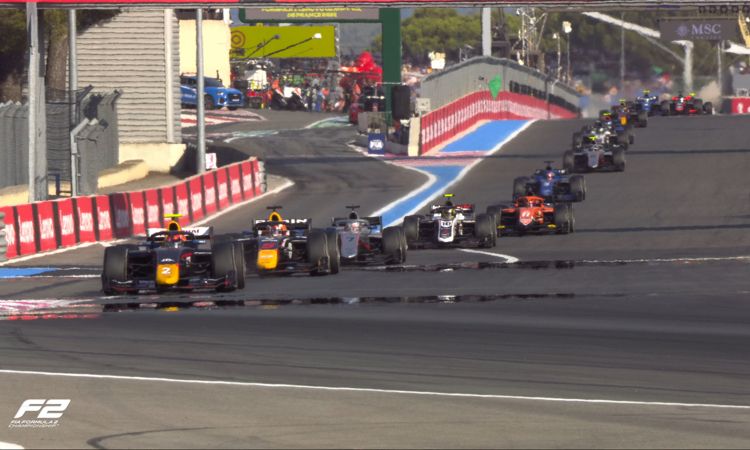 It was a very action packed time at Circuit Paul Ricard in Le Castellet, France when the F2 Sprint Race got underway. Having qualified in P10, Jehan Daruvala was starting the race on pole position, thanks to the reverse grid system in the Sprint Race where the order of the top 10 qualifiers is reversed, and he got a great launch from the grid spot, claiming the lead of the race. Behind him, Liam Lawson got a below-par start, and dropped to P4 from P2, with Hitech driver Marcus Armstrong and title protagonist Felipe Drugovich passing him. Drugovich however, ran out of road on turn 1, and dropped back in the order behind Lawson and title rival Theo Pourchaire.

Jehan Daruvala led the field in the initial laps of the race.

Liam Lawson showed great pace in the race from thereon. The Kiwi soon made a highly optimistic late brake lunge on Armstrong, upping himself into second place. At this moment, Daruvala comfortably sat in the lead, with the gap between the pair of Red Bull Junior drivers being over 2 seconds. Liam Lawson kept improving his times and clawing into Jehan Daruvala’s lead, until a safety car intervention nullified the gap. He eventually passed Daruvala with the help of DRS, and claimed victory. Daruvala fended off immense pressure from Armstrong, and a mistake from the Kiwi dropped him out of the podium places. Armstrong’s race faded after that, and he eventually finished out of points. Home hero Theo Pourchaire finished in P3 on the road, but received a post-race time penalty of 5-seconds for forcing Armstrong off at turn 11. He dropped down to P7, scoring only two points, while Drugovich was promoted to third place, earning 6 points – 4 more than Pourchaire.

With Jehan claiming second place, the Indian driver earned 8 points, more than all 3 of his title rivals – Felipe Drugovich, Theo Pourchaire, & Logan Sargeant. Daruvala will start today’s Feature race in P10, and will hope to make the best of the top 10 start. Daruvala is currently sitting in P4 in the championship, losing out on a spot in the top 3 due to multiple unfortunate races, including mechanical DNFs and penalties induced for errors outside of his control. Having completed two Formula 1 tests with team McLaren in its 2021 challenger – the MCL35 – and scoring enough superlicense points, Jehan Daruvala is eligible for a Formula 1 superlicense, and should he finish in the top 3 spots in the championship, the Red Bull junior may have a decent shot at a Formula 1 seat in 2023, most likely at AlphaTauri F1 team.