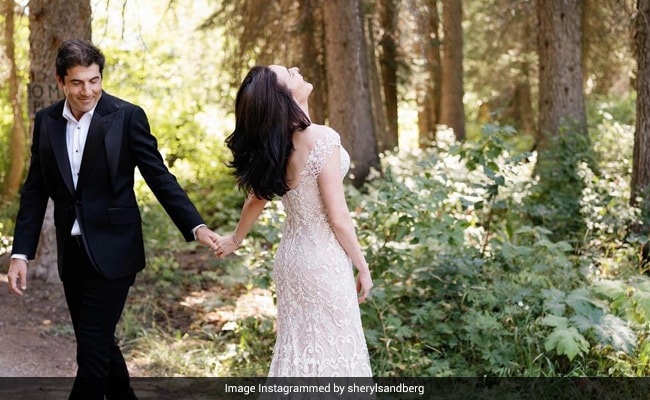 The couple posted a beautiful photo from their wedding on Instagram.

The power couple announced their nuptials on Instagram with a beautiful image of them holding hands and sharing a laugh on a gravel path in the woods.Ms Sandberg kept the caption simple with just the word “Married” and a bunch of heart emojis.

Mr Bernthal, on the other hand, opted for a more detailed note. The businessman, who is also brother to actor Jon Bernthal, said, “After both experiencing loss, Sheryl Sandberg and I weren’t sure we would ever find love again. Over the last three years, we’ve merged our lives and blended our families. Our wedding today was a dream come true.”

Ms Sandberg has two children with the late Mr Goldberg, while Mr Bernthal has three children from his first marriage. As per a report by People Magazine, all five children were part of the wedding party. Speaking about their blended family, Mr Bernthal told the publication: “It is our wedding as the seven of us.” To this, Ms Sandberg added, “We keep saying, ‘We’re all getting married.’” The couple has been engaged since February 2020.

It was, in fact, Mr Goldberg’s brother Rob Goldberg who first introduced Ms Sandberg to Mr Bernthal in 2019. He also served as the co-officiant for the nuptials.

Earlier this year, Ms Sandberg announced that she will be stepping down as the COO of Meta in the fall of 2022. On August 1, Javier Olivan replaced Ms Sandberg as the COO. She will be an employee of Meta through September 30. Following this, Ms Sandberg will continue to serve on the board of directors of the organisation and focus on her “foundation and philanthropic work,” she had said in her announcement.