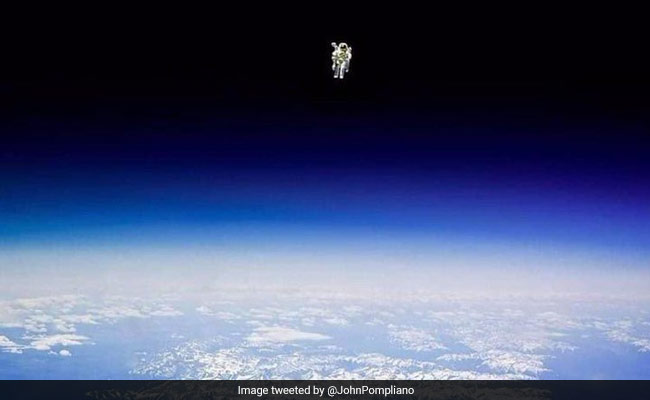 Images and video clips of astronauts spacewalking never cease to amaze us. This highly skilled task is usually performed when astronauts are tethered safely to a spacecraft. So imagine the surprise when we came across a photo of an astronaut floating untethered above the Earth. Yes, you read that right. Recently, the image of an untethered astronaut moving about in space started doing the rounds of social media. While many had their jaws drop at the spectacle being put up, others were skeptical about the authenticity of the image.

A Twitter user, who posted the photo, wrote: “Insane picture of astronaut Bruce McCandless II, the first person to conduct an untethered free flight in space”.

This tweet drew a slew of negative reactions from users, one of whom labelled it “nonsense”.

So funny how many ppl believe this nonsense

Another user said that the tiny astronaut figure in the photo was only a clipart.

It’s just a clip art on a background… smh pic.twitter.com/y0mgFaOVLk

Another user sarcastically wrote, “Welcome to the wonderful world of image compression and jpg artefacts”.

Welcome to the wonderful world of image compression and jpg artifacts

A user wrote, “He did this in 1984. Literally, just google his name. This photo is photoshopped though, but only to make the mountains appear like they do”.

He did this in 1984. Literally just google his name. This photo is photoshopped tho, but only to make the mountains appear like they do. He really did this untethered. He died in 2017!

The image was shared on November 4, as a Facebook post. The post read, “This is a real image of an astronaut that ventured 320 feet from the orbiter, he was 170 miles above Earth. It’s arguably one of the best astronaut related photos ever taken!”

Believe it or not, the untethered spacewalk is a fact. A report by USA Today confirmed that parts of the viral photo were taken from the 1984 picture of astronaut Bruce McCandless II during the first-ever untethered spacewalk. That year, Mr McCandless and fellow astronaut Robert Lee Stewart piloted a jet propulsion backpack, called the Manned Maneuvering Unit.

While the untethered spacewalk did take place, the photo shared on Twitter is definitely digitally altered. According to USA Today, the original NASA image did not show the mountain ranges that are visible in the viral photo. Instead, the Earth image was taken from a mountain range photo, captured during a flight from Toronto to Beijing, China.