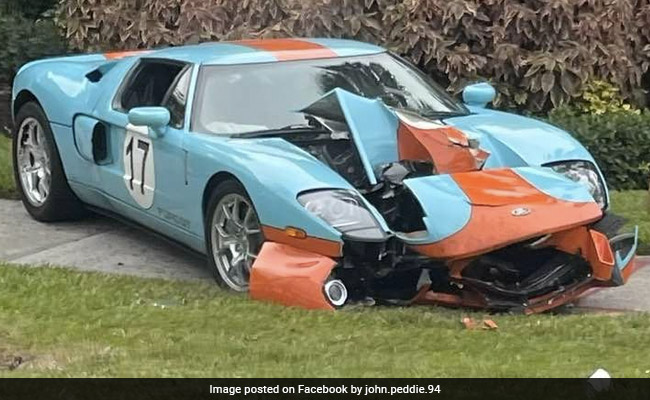 A Ford GT owner in Florida crashed his recently purchased $704,000 classic supercar because he was “unfamiliar” with manual transmission. According to Road&Truck, 50-year-old Robert J Guarini recently became the proud owner of the 2006 Heritage Edition Ford GT. However, shortly after purchasing it, he smashed it into a tree, completely trashing the front of the vehicle.

An eyewitness named John Peddle posted photos of the car crash on Facebook, which show that the damage is limited to the front of the car. However, the hit was substantial enough to trigger multiple airbags, disable the vehicle, and cause the GT to slide far enough that it blocked a nearby sidewalk.

According to Road&Truck, the 50-year-old told the cops that he lost control while driving away from his housing development due to being “unfamiliar with how to drive a stick shift”. The police report stated that after the crash, Mr Guarini approached a nearby security worker and told him he didn’t have a phone so would have to return to his home to call the police, leaving the bashed-up car unattended.

Even though Mr Guarini told the officers that it was his inexperience using gears that led to this mishap, but it wasn’t the only problem, according to him. Speaking to the media outlet, the US man claimed that old tyres, muddy pavement and fresh detailing caused the 550-horsepower supercar to swing out and hit a tree. He added that the crash occurred as he shifted up into second gear from first.

Following the accident, Mr Guarini was issued a citation for driving with a suspended licence. He was also given a warning for driving an unregistered vehicle. But the 50-year-old told Road&Truck that his suspension was due to a “clerical error”.