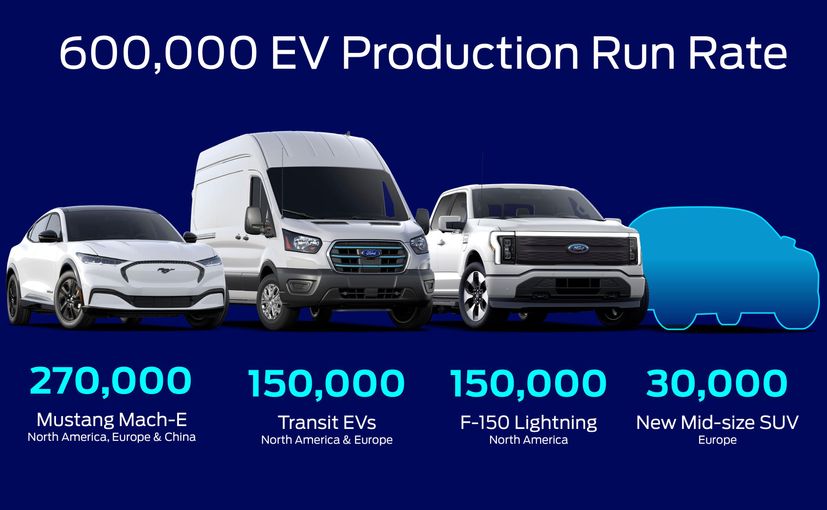 The Ford Motor Company put plans in place to expand on its electric vehicle manufacturing capacity globally. The company is targeting expanding its annual EV sales in the coming years with a target of 600,000 set for 2023 and over 2 million units annually by end 2026. The company is set to invest over $ 50 billion into its electric vehicles over the course of the next four years along with announcing some battery and battery material sourcing deals with companies round the globe.

“Ford’s new electric vehicle lineup has generated huge enthusiasm and demand, and now we are putting the industrial system in place to scale quickly,” said Jim Farley, Ford’s President and CEO. “Our Model e team has moved with speed, focus and creativity to secure the battery capacity and raw materials we need to deliver breakthrough EVs for millions of customers.”

Ford plans to produce 600,000 EVs annually on a global scale by end-2023 with the Mach-E accounting for a significant portion.

Ford targets most of its global EV sales to come from the all-electric Ford Mach-E with e company eyeing sales of 270,000 units spread across North America, Europe and China. Ford also expect to sell 150,000 units each of the F-150 Lightning and Transit EVs. To ramp up its production numbers Ford has signed agreements with several battery technologies from across the globe as well as expanding into using Lithium Iron Phosphate (LFP) battery packs alongside the more expensive Nickel Cobalt Manganese (NCM). Ford says that it has so far secured 100 per cent of its annual battery capacity needed to meet its 2023 targets.

The firm has tied up with Chinese battery firm Contemporary Amperex Technology Co., Ltd. (CATL) for LFP battery packs for the Mach-e and F 150 Lightening for the North American markets. The company is also leveraging its connections with LG Energy Solutions and SK On to secure additional NCM battery packs.

Ford has entered into numerous MoUs and partnerships for supply of raw materials and battery packs.

Coming to its 2026 targets, Ford said that it had secured about 70 per cent of its required battery supplies including signing a non-binding memorandum of Understanding (MoU) with CATL for battery supplies for its plants in Europe, China and North America. The firm also recently entered into a joint venture with SK On to set-up three new battery production facilities in North America as well as setting up a fourth – its own in-house facility to manufacture LFP battery packs – as well by 2026.

The company has also signed an additional MoU with SK On for battery supplies from its European plants along with another with Turkey-based Koc Holdings for a joint venture to manufacture battery packs.

Ford has also signed several non-binding MoUs with a number of raw material suppliers for its battery pack production plans.