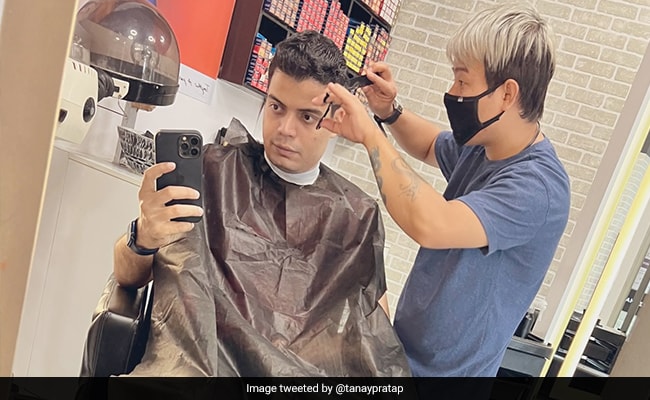 Former Microsoft executive Tanay Pratap is being trolled on social media for attending a meeting while getting a haircut in a salon. Taking to Twitter on Wednesday, Mr Pratap, who is the founder and Chief Executive Officer (CEO) of Invact Metaversity, posted a picture of himself, in which he was seen holding a mobile phone while his hairdresser was busy chopping off his hair.

In the caption of the post, Mr Pratap wrote, “Peak productivity unlocked today. Took meeting while getting a haircut. The staff were the sweetest to stop music while I took the meeting. Startups are not for everyone. The only time you get when you’re not working is while you’re sleeping.”

Peak productivity unlocked today. Took meeting while getting a haircut.

The staff were the sweetest to stop music while I took the meeting.

Startups are not for everyone. The only time you get when you’re not working is while you’re sleeping. pic.twitter.com/RnPXQq8gXP

Mr Pratap’s post soon took the internet by storm. It garnered hundreds of likes and comments. While he must have expected people to applaud and praise him for his hectic work schedule, internet users slammed him for seeking “attention” and disturbing the salon staff for his own good.

“Could have scheduled the meeting and haircut at different times in place of disturbing everyone who was at the salon to get a haircut while listening to soft mellow music,” wrote one user. “This is the opposite of “productivity”- if you are unable to manage your time to the extent of not being able for take a haircut like a normal person that tells me that you’re being inefficient,” said another.

When one user jokingly asked Mr Pratap to skip sleeping as it is “for the weak,” the former Microsoft executive replied, “I want to give it up. But there’s no way to do it physically. I feel sleep is the most wasteful activity we engage in.”

A third user mockingly commented, “Then get a haircut while sleeping. Absolutely clownery,” while a fourth hilariously added, “TIL a great productivity hack – go bald. No wasting time for haircuts or hair washes that way.”

One Twitterati even wrote, “Man is so busy that he took photo while he was in a meeting between his haircut and tweeting it. Attention seeker.” “Which model phone is that, which takes pic from rear camera when attending a video call via front cam?” another asked sarcastically.