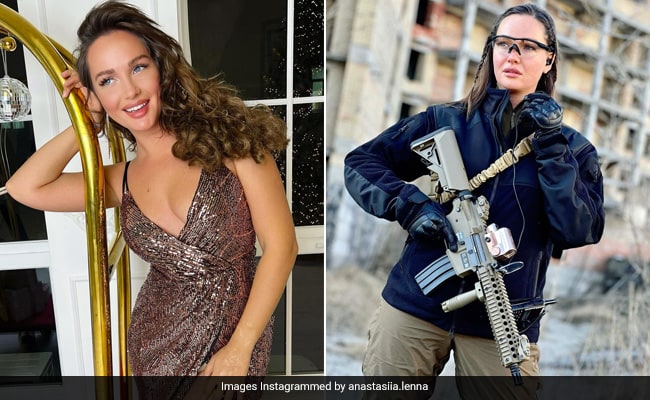 A former Miss Ukraine has vowed to defend her country against Russian invaders. Anastasia Lenna, who represented Ukraine in the Miss Grand International beauty contest in 2015, is now joining the Ukrainian military as it fights Russian forces, reports The New York Post.

“Everyone who crosses the Ukrainian border with the intent to invade will be killed!” the former beauty queen said in an Instagram story posted on Saturday. She shared photos of herself with an assault rifle, wearing military gear, on the photo and video sharing platform.

According to Sky News, Anastasia Lenna also posted a message in support of Ukrainian President Volodymyr Zelensky. She shared a photo of soldiers walking with President Zelensky while hailing him as a “true and strong leader”.

The former Miss Ukraine appealed for international support in several other posts shared with her 2 lakh followers. In one post, she asked her countrymen to take down road signs in order to make it difficult for Russian troops to navigate the country.

Ms Lenna, who is a marketing and management graduate from Slavistik University in Kyiv, speaks five languages and has worked as a translator.

She took up arms after the Russian army invaded Ukraine last week. So far, 102 civilians, including seven children, have been killed after the Russian invasion, reports AFP. Ukraine has said it wants an “immediate ceasefire” and withdrawal of Russian troops.